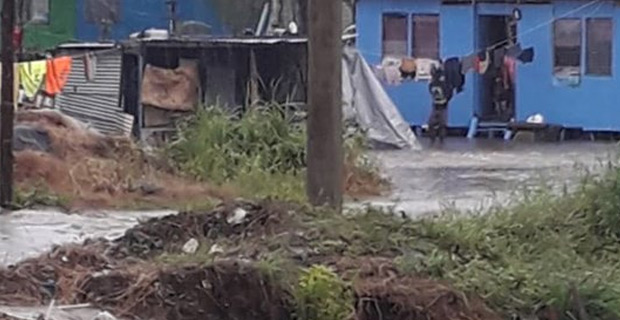 The Police Special Response Unit has evacuated five families from their houses at Veiraisi Settlement near Qarase Road in Nadera. 21 people are now taking shelter at the Nadera Methodist Church. We have received reports that floodwaters from a creek have entered some houses at Veiraisi settlement near Qarase Road in Nadera.

Some police officers crossed the flooded area and removed an elderly couple from their house from this settlement and have taken them to Nadera Methodist Church.

Part of the road leading to Veiraisi settlement in Nadera is flooded and access to hundreds of people has been cut off. Fiji Roads Authority's CEO, Jonathan Moore says this area is prone to flooding as it is reclaimed land.

He is urging people to take necessary precautions.

Meanwhile, the FRA says persistent rainfall has resulted in an increase in the number of potholes in some places around the country, particularly in the Central Division.

The FRA says its contractor is working hard to resolve the situation but this is likely to take a few days, subject to weather conditions.

The government developed two web platforms through the Geographic Information System (GIS) to better plan and mobilise resources during the COVID-19 ... 12 minutes ago

Attorney General and Minister for Economy Aiyaz Sayed-Khaiyum says what they are trying to get Australia and New Zealand to do is to change the ... 59 minutes ago