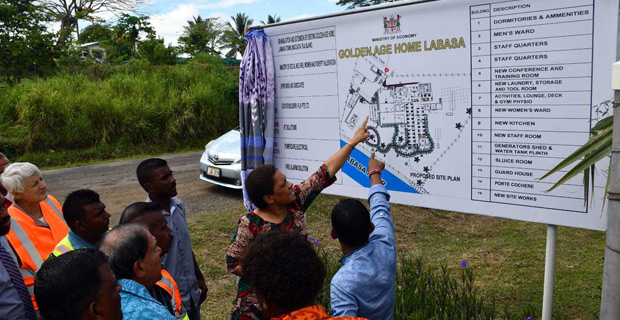 People can now look forward to new and improved Golden Age Home in Labasa which will turn into a modern age-friendly facility for the Northern division.

While officiating at the groundbreaking ceremony of the Home today, Minister for Women, Children, and Poverty Alleviation Mereseini Vuniwaqa says the new complex is designed to have 20 male and 20 female residents and is approximately 1,680 square meters in floor area.

She says the project will cost $4.76 million in construction value and has $763,000 budgeted for furniture and fit-out.

Vuniwaqa says it is expected to be completed by July 2021.

Ground-breaking event for the extension, upgrade and refurbishment of the Golden Age Home, Labasa....beginning a $4m Government investment into the care of the aged in society.

She says the existing complex can host 14 male and 10 female residents.

Vuniwaqa says it is situated on aging building infrastructure and has limited service areas for its clients, with non-disability friendly toilets and showers, and very basic kitchen, dining and lounge areas.

It is approximately 600 square metres in floor area.

She says the percentage of the older population in Fiji defined as people aged 60 and over, has been increasing steadily since 2000.

She says today marks a dream come true for the residents and staff that have been part of this Home for the last decade, as it will mark the realization of complying with national minimum standards in age care facilities as well as preparing for an increasingly Aged society.

The Minister also acknowledge the founders of this Home, the Jadu Ram family for their vision and foresight which has enabled the Government to maintain a home of this nature in the Northern division.

Vuniwaqa says the lead Consultancy “Shri Singh & Associates Limited and the Construction Company “Estate Builders” have been awarded the tender to facilitate this project for the government.

She says our senior citizens are the pillars of our communities and they have a wealth of knowledge, skills, and experience that can benefit society.

Vuniwaqa says it is important to acknowledge our senior citizens and the contribution that they have made to our society.

A 37-year-old man who is alleged to have raped, assaulted and robbed a 58-year-old woman in a settlement in Suva has pleaded not guilty to all his ... 17 minutes ago

A 36-year-old man from Samabula who was allegedly found with two bags of methamphetamine and five bullets of marijuana has been remanded in custody ... 21 minutes ago

Former Lawyer Shazran Abdul Lateef and Zoe Maharaj Moore who are charged with drug-related offences will take their plea on the 22nd of this ... 24 minutes ago

Police and the Land Transport Authority of Fiji are searching for a suspect of a hit and run incident which caused the death of a man in Saweni, ... 29 minutes ago