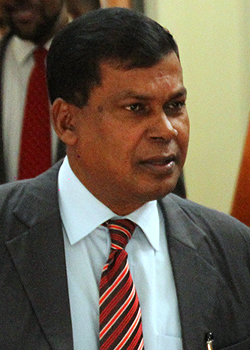 The National Federation Party is calling on government to use the 100th anniversary to commemorate the arrival of the last ship carrying indentured labourers to lift the indefinite ban on former Fiji citizens Professor Brij Lal and Dr Padma Lal from entering Fiji.

Party’s leader Professor Biman Prasad says it will be a symbolic gesture on the part of Government if the Head of State President Jioji Konrote, while launching commemorative events in Suva tomorrow makes an announcement to this effect.

He says after repeated attempts to seek the truth from government, the former Immigration Minister Timoci Natuva admitted last July that the decision to put Professor Brij and Dr Padma Lal’s names on the list of people prohibited from entering Fiji came from the Prime Minister’s Office.

Prasad says this ban is an insult not only to Professor Lal and his wife, but also to all right‑thinking and law‑abiding citizens and to the Indo‑Fijian community whose historical background right from the days of indenture has been well researched and documented by Professor Lal.

When contacted this afternoon, Director of Immigration Nemani Vuniwaqa said that government’s stand on Brij Lal and Padma Lal has not changed.

He adds they have not received any new requests from these two individuals.

Meanwhile, Biman Prasad says this is nonsense talk as both individuals had made their applications last year.

Supervisor of Elections, Mohammed Saneem did a walk through with the media at the Fijian Elections Office Warehouse in Laucala Beach, on how the ... 53 minutes ago