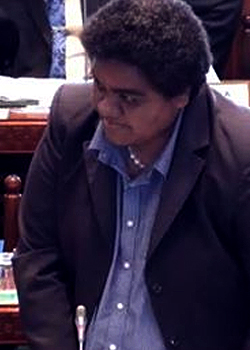 The National Federation Party says they are concerned as the former Commissioner of Police, Ben Groenewald says there was military interference in police work.

NFP President Tupou Draunidalo says the government should give a full explanation and why a military officer has been appointed as Acting Commissioner.

Draunidalo has also questioned if there are no Police officers trained to take up the Commissioner’s post.

She says they will continue to ask the Prime Minister for an explanation on this issue.

Fijian Drua centre Kalaveti Ravouvou who will make his debut for the Vodafone Flying Fijians this afternoon is relishing the opportunity to play again... 2 hours ago
LATEST NEWS

Former NRL and Wallabies star Lote Tuqiri will now help workers under the Pacific Australia Labour Mobility scheme to make a smooth transition in ... 23 minutes ago

20 people were charged with a total of 47 counts of serious sexual offences last month. Of the 20 people charged, two were 17-year-old boys who ... 2 hours ago

6 new cases of measles have been identified in Fiji. 2 cases are in Labasa, 3 in Rewa and one case is in Nasinu. The Ministry of Health has ... 13 hours ago

Fijian TikToker Shaheel Sanil Prasad who is also known as Shaheel Shermont Flair is a hit on social media having over 25 million views for a single ... 13 hours ago

The implementation of the second tranche of the National Minimum Wage and the Wages Regulations commences from today. The new rate for the ... 17 hours ago
More News
TOP