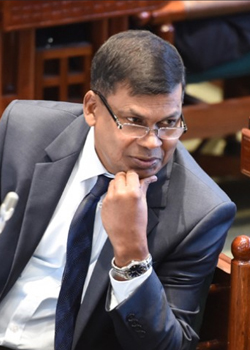 The Leader of the National Federation Party, Biman Prasad

The Leader of the National Federation Party, Biman Prasad has written to the Speaker of Parliament, Doctor Jiko Luveni and Minister for Finance, Aiyaz Sayed-Khaiyum asking for the 2014 Auditor General’s reports to be tabled in parliament before the presentation of the 2016 National Budget.

Prasad said the 2014 Auditor General’s reports are critical for the analysis of the state’s expenditure policy in the budget as they would reflect the manner in which funds allocated in the previous budget were spent.

He said according to the Audit Amendment Act of 2006, a report of the Auditor General to parliament about an audit must be submitted to the Speaker within 9 months after the year to which the audit relates or within a longer period appointed by the resolution of parliament.

Prasad said the constitution states that the Auditor General must submit a report made by him or her to the Speaker and must submit a copy to the Minister for Finance.

We have sent questions to Aiyaz Sayed-Khaiyum and Doctor Jiko Luveni.

Sayed-Khaiyum is yet to respond.

Doctor Luveni said she is consulting on the issue and will not make further comments.

Five new COVID-19 cases. This means there have 8 border quarantine cases since 6th July 2020. All cases in stable condition. Only one of the cases hav... 6 minutes ago
LATEST NEWS