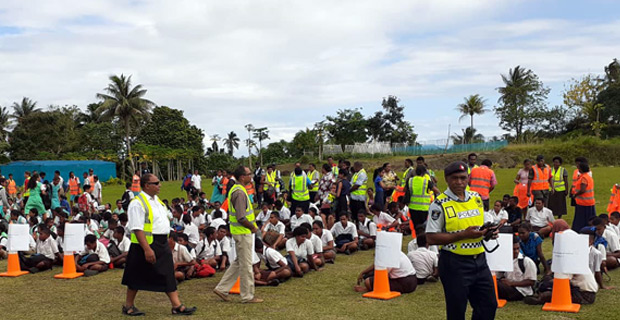 NDMO Tsunami Drill Coordinating Officer Ben Kuboutawa says the initial response from the students was very good as they were given a time frame of 1 hour 30 minutes to reach safety zone but they managed to do that in just over 30 minutes.

He says these drills will help them have a better understanding and what they are lacking in terms of preparing for natural disasters and will work with schools on how more improvements can be made.

Marist Champagnat Institute Principal Naisa Toko says his students were well aware of the procedures that have to be taken during the state of emergencies as they have these drills in their schools at least three times a term.

He says the students took less than three minutes to assemble.

Meanwhile, Marist Champagnat Institute  Year Two vocational student, Lagilagi Lockington says having these drills on a regular basis in school has helped them to better understand the threats of these disasters and what needs to be done.

The results for all 24 players that were tested for marijuana, methamphetamine and cocaine use during yesterday’s group matches at the Punjas ... 55 minutes ago

Former politician and Taukei Movement member, Apisai Vuniyayawa Tora has passed away at the age of 86. In a statement, the family says the late ... 3 hours ago