Measles epidemic in Samoa takes another 6 lives, bringing the toll to 39

Measles epidemic in Samoa takes another 6 lives, bringing the toll to 39 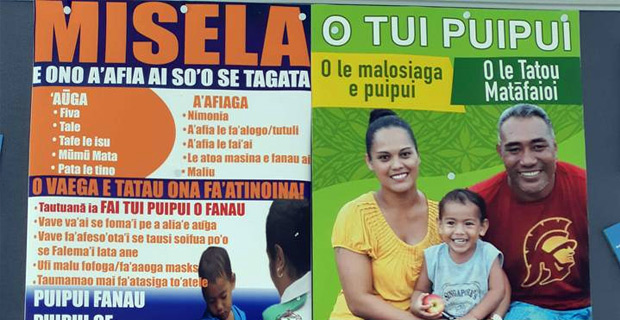 There have been another six deaths in Samoa's measles epidemic, bringing the toll to 39.

Radio New Zealand reports all but four of the deaths are children under the age of four, including the six who died in the past 24 hours.

And 190 people with the56 disease remain in the hospital, including 25 critically ill children and pregnant women.

Latest update: 2,936 measles cases have been reported since the outbreak with 250 recorded in the last 24 hours. To date, 39 measles related deaths have been recorded. Since the Mass Vaccination Campaign on 20 Nov 2019, the Ministry has successfully vaccinated 44,907 individuals. pic.twitter.com/ZsqRGj9tNQ

A mass vaccination campaign is underway with dozens of New Zealand and Australian nurses in Samoa to assist.

Samoa's top health official has predicted the worst was still to come.

The Acting Permanent Secretary for Health, Dr. James Fong will hold a press conference at 3 o’clock this afternoon in relation to COVID-19. Stay wit... 9 minutes ago
LATEST NEWS

Home & Living has opened its 11th store in Korovou which is expected to employ 4 people. The investment is over $100,000. Speaking during ... 54 minutes ago