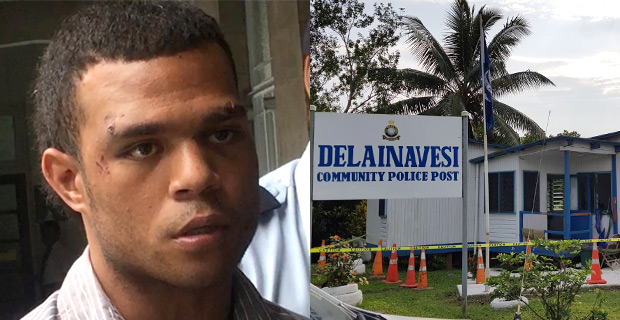 Samuela Bokadi is facing one count of damaging property, 6 counts of attempted act with intent to cause grievous harm and resisting arrest.

The man who was armed with two cane knives and allegedly attempted to forcefully enter the Delainavesi Police Post in July last year appeared in the Suva High Court this morning.

Samuela Bokadi is facing one count of damaging property, 6 counts of attempted act with intent to cause grievous harm and resisting arrest.

He allegedly attempted to assault the partner and five police officers.

State lawyer Eoghan Samisoni told the court that he has been informed that the issue is that Bokadi was so intoxicated that he can't remember what happened on the day of the alleged incident.

Samisoni says they will be calling eight witnesses.

Bokadi has been remanded in custody and the matter has been adjourned to 14th February next year.

Bokadi had allegedly threatened his partner who then ran to the Delainavesi Police Post to ask for assistance.

The partner was then taken by a female police officer who was alone at the Delainavesi Police Post and put in a safe room. He was allegedly drunk at the time of the incident.

Bokadi allegedly smashed the railings of the police post.

The situation was then contained as a number of officers arrived in emergency vehicles and motorbikes.

The Acting Permanent Secretary for Health, Doctor James Fong says the 66-year-old man who tested positive for COVID-19 after returning from India does... 34 minutes ago
LATEST NEWS

A Chinese fishing vessel which has been carrying a dead crew member from May this year is stuck out at sea. An agent of the vessel has told ... 19 minutes ago