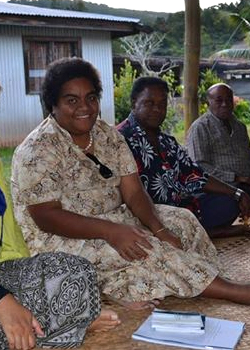 Although the Multinational Observer Group report clearly states that the 2014 elections were credible, the National Federation Party believes otherwise.

The Observer Group states that the outcome of the elections broadly represented the will of the Fijian voters and the conditions were in place for Fijians to exercise their right to vote freely.

When questioned by Fijivillage on whether NFP accepts the election results and accepts the Observer Report as it clearly states that the Fijian election last year was credible, NFP President Tupou Draunidalo said the recommended changes need to be made.

She only said that they are sitting in parliament when asked by us on whether they accept the election results.

The Multinational Observer Group’s final report also states the election was enthusiastically embraced by the voters of Fiji, who were keen to participate in the democratic process.

The Group also observed that the election was conducted in an atmosphere of calm, with an absence of electoral misconduct or evident intimidation.

Draunidalo said the Fijian Elections Office and the Electoral Commission must implement the recommendations of the Multinational Observer Group.

Draunidalo said this is after government brings before Parliament, the Media Industry Development Decree, the Political Parties Decree and the Electoral Decree to make the necessary changes as recommended by the MOG.

A video has gone viral on social media where a police officer is seen assaulting and manhandling a bus driver in Labasa Town this afternoon. Police... 10 hours ago
LATEST NEWS

The reprehensible act of gratuitous violence captured on a video showing a police officer beating up a driver for allegedly not showing his driving ... 10 hours ago

It was an emotional and proud moment for Leone Tawake and his family, as he received his late brother Josaia Usumaki’s Bachelor’s degree at the ... 12 hours ago

Attorney General Aiyaz Sayed-Khaiyum says teachers have a very important responsibility because they can have an enormous influence in what a child ... 13 hours ago

Residents of Koronivia in Nausori are raising serious concerns following cases of alleged sacrilege in 2 Hindu temples in the last few weeks and ... 13 hours ago
More News
TOP