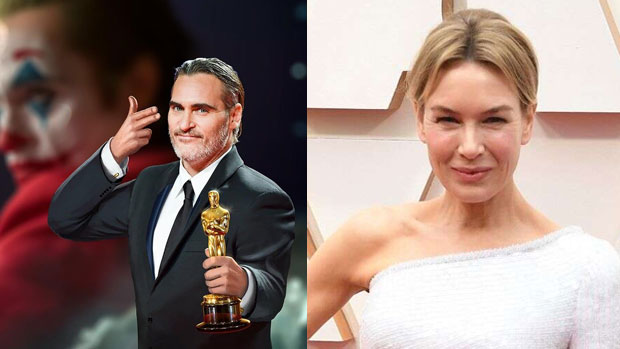 Joaquin Phoenix and Renee Zellweger have won the Best Actor and Actress Award at the Oscars.

An emotional Joaquin Phoenix concludes his acceptance speech by remembering his brother River Phoenix: "When he was 17, my brother wrote this lyric. He said, 'Run to the rescue with love—and peace will follow.'" https://t.co/8kz7m5vtnF #Oscars pic.twitter.com/rg89eYCyLK

While accepting the award, Zellwegger said Ms Garland, you are certainly among the heroes who unite and define us, and this is certainly for you.

Brad Pitt won the award for the Best Supporting Actor for his role in Once Upon a Time... in Hollywood.

Zellweger, Phoenix, Pitt and Dern have won their acting prizes at every major ceremony this awards season.

South Korean film, Parasite won the award for best movie by beating Joker, 1917, Little women, Jojo Rabbit, Once Upon A Time In Hollywood, The Irishman and Ford vs Ferrari.

Toy Story 4 has won the award for the Best Animated Feature.

Eminem gave a surprise performance of his hit "Lose Yourself" from his film 8 Mile at the 92nd annual Academy Awards.

Eminem stopped by the #Oscars to perform 'Lose Yourself' and the crowd almost lost it 😂 pic.twitter.com/NaKxpeJG2o

During Eminem’s performance, a number of stars sang along and bobbed their heads to the rapper’s Oscar-winning song.

Among those seen listening but also confused by the performance were Anthony Ramos, Kelly Marie Tran, Idina Menzel, Billie Eilish and Martin Scorsese.

Look, if you had another shot, another opportunity... Thanks for having me @TheAcademy. Sorry it took me 18 years to get here. pic.twitter.com/CmSw2hmcZo

207 new junior nurses have been posted to the CWM, Lautoka and Labasa hospitals. They are now part of the health system and will be appointed as ... 34 minutes ago