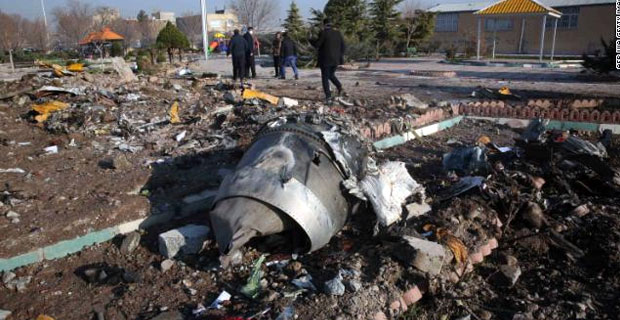 Iranian state TV, citing a military statement, says the country unintentionally shot down a Ukrainian jetliner, killing all 176 aboard.

The statement blamed 'human error' for shooting down the plane on Tuesday.

#Iran has invited the #US National Transportation Safety Board to take part in its investigation into the crash of #Ukrainian jetliner and the US agency has agreed to assign an investigator, an #Iranian official said. pic.twitter.com/m712wK7OFU

The government also offered an apology to families.

The jetliner, a Boeing 737 operated by Ukrainian International Airlines, went down on the outskirts of Tehran during takeoff just hours after Iran launched a barrage of missiles at U.S forces.

The announcement, citing “human error” for the strike, came Saturday via Iranian state TV, referring to statement from the military.

Iran had denied for several days that a missile downed the aircraft. But then the U.S and Canada, citing intelligence, said they believe Iran shot down the aircraft.

According to officials the plane, en route to the Ukrainian capital of Kyiv, was carrying 167 passengers and nine crew members from several countries, including 82 Iranians, at least 63 Canadians and 11 Ukrainians.

CCTV cameras will soon be installed in locations around Nausori Town to help Police deal with growing concerns about the increasing number of criminal... 45 minutes ago
LATEST NEWS

A 19-year-old woman will give evidence in her uncle’s rape trial which will begin next Wednesday. Suva High Court Judge Justice Salesi Temo was ... 42 minutes ago