I did not cause NBF crisis, AG should get it right - Rabuka

I did not cause NBF crisis, AG should get it right - Rabuka 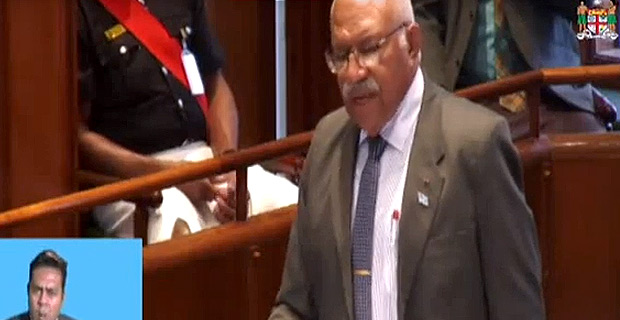 Opposition Leader and SODELPA leader, Sitiveni Rabuka says he did not cause the NBF crisis, but he claimed in parliament that he solved it.

Rabuka stated this in Parliament today while speaking on the 2019/2020 National Budget debate.

Rabuka says the problem of the NBF did not only occur in his time, but there is no excuses.

He says it was an ongoing problem before he became the Prime Minister.

Rabuka says when the problem was brought to his attention, he acted swiftly to minimise any further risk and did not shy away because the savings of citizens of Fiji were at risk.

He told the parliamentarians that people responsible were taken to task, and some people have served jail sentences.

Rabuka went on to say that Attorney General, Aiyaz Sayed-Khaiyum should get his facts right, and put the issue in its proper context.

The SODELPA Leader says it is unfortunate, and as usual Sayed-Khaiyum normally turns genuine observation and constructive comments into an opportunity to attack the SVT Government and him personally.

Rabuka says last week was not the first time that Sayed-Khaiyum  brought up the NBF saga and he has made it clear in Parliament   and in public statements, on the failure of the NBF, that as a leader, he took full responsibility because he was the Prime Minister at that point in time.

Rabuka then claimed in Parliament that Sayed-Khaiyum has a hand in most of the decisions taken by independent institutions and it is sad to say that the independence of such institutions have been marginalised by the Attorney General.

He then said that Sayed-Khaiyum should also be asked to explain to the people of Fiji as to how much it cost to cancel the Naim contract which Sayed-Khaiyum negotiated with an interest rate of 6%, much higher than the normal 2.52% issued by multilateral institutions.

He said Sayed-Khaiyum should be asked to explain what happened to the One Hundred Sands Casino deal and the $100,000 a month penalty he was to levy for non‑implementation.

Rabuka says the Minister for Economy should be asked to explain what happened to the Waila City development.

He says it has to be explained what is the cost of the damages at Malolo Island to current and future generations and who is responsible.