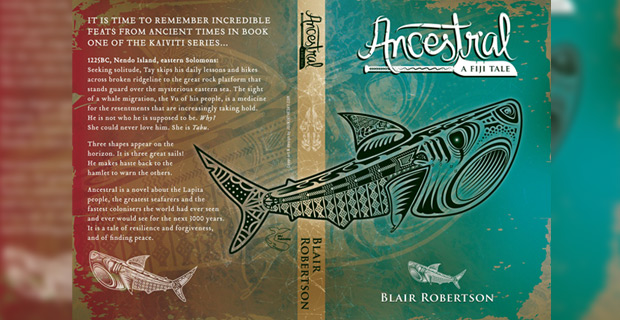 A historical fiction novel based on the very first landing in Fiji in the year 1225BC titled Ancestral: A Fiji Tale will be launched tomorrow.

Author Blair Robertson says the tale is based on a young ambitious child named Tay and a high-speed chase at sea that lasts for more than a week as the survivors of an attack try to get away.

Robertson says the story is also about Tay and his relatives who live in the Eastern Solomons and are the first Pacific Islanders to discover Fiji which, he says, was quite a challenge considering the technology available to them.

The 46-year-old says from his book the reader will learn the Pacific Islanders were the greatest sailors of all time.

Robertson reveals that doing research for his book, he also came across the story of a blind navigator who could land his boat on islands just by feel.

The author says the story finishes at Vuda in Fiji which is known as the area of the first landing.

A consultant in the electricity sector by profession, Robertson says it was the great research done by expert archaeologists and anthropologists that was available that gave him the ability to write his book.

He adds he started work on this novel in 2015 after the launch of his first book.

He says he started writing in his spare time and realised every book he wrote had to be about Fiji.

Robertson says currently he is making his first novel Kaiviti: A Fiji Tale, which was released in December 2015, into a screenplay.

He says some people might think this might be a long shot but says you never know until you try.

Robertson was born in Fiji but has spent some years living in New Zealand as well as some other countries.

He currently resides along the Coral Coast.

The Acting Permanent Secretary for Health, Dr. James Fong will hold a press conference at 3 o’clock this afternoon in relation to COVID-19. Stay wit... 51 minutes ago
LATEST NEWS