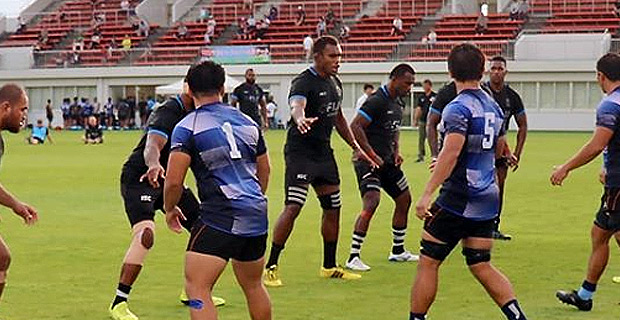 Hopes are high that the Fiji Airways Flying Fijians will stamp their mark in history in the 2019 Rugby World Cup with a performance to remember.

A tough assignment awaits them tomorrow when they take on a hungry Australian Wallabies side who want to prove to the world that they mean business and are serious contenders to win the Webb Ellis Cup.

When it comes to the World Cup, every game is like a final, a must win, and when it comes to Fiji’s pool, no team is to be taken lightly - Australia, Wales, Georgia and Uruguay are all fighting for the two top spots in the pool.

On the streets, people are saying that all their plans are set to cheer on the team tomorrow.

Prime Minister, Voreqe Bainimarama who will be at Sapporo Dome to watch the Fiji vs Wallabies match tomorrow, has sent a video message to the players that the entire nation is behind them in this Rugby World Cup.

Bainimarama told the players that this is their moment, their moment to seize their place in history and make a statement in rugby’s grand stage.

Australia and Fiji have met just seventeen times since their first match in 1952.

The Wallabies have won its last five meetings against the Flying Fijians. They last met in June 2017 and the Wallabies won that match 37-14.

The Rugby World Cup will begin today with host nation Japan taking on Russia at 10.45pm.

Fiji will face the Wallabies at 4.45pm tomorrow.

France and Argentina face off at 7.15pm Saturday while the All Blacks and Springboks clash at 9.45pm Saturday.

On Sunday, Italy and Namibia play at 5.15pm, Ireland and Scotland face off at 7.45pm Sunday while England clash with Tonga at 10.15pm Sunday.

Registrar of Political Parties, Mohammed Saneem has suspended SODELPA for 60 days as it has failed to conduct its management board meeting as per thei... 11 minutes ago
LATEST NEWS

The WHO suspends testing of hydroxychloroquine as a possible Covid-19 treatment. A study suggested the drug could cause heart problems in patients ... 6 minutes ago

Registrar of Political Parties, Mohammed Saneem has suspended SODELPA for 60 days as it has failed to conduct its management board meeting as per ... 11 minutes ago