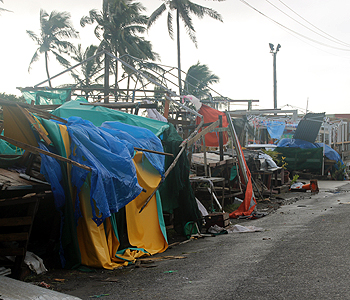 Severe Tropical Cyclone Winston continues to move away from the Fiji Group.

The centre of Severe Tropical Cyclone Winston which is still a Category 5 system was located West of Viwa Island in the Yasawas.

The eye of the cyclone was located 140 kilometres west of Viwa at 7am today.

It is moving west, away from Fiji, at about 24 kilometres per hour.

On this track, the cyclone is expected to be located 340 kilometres west of Nadi at 7pm tonight.

A heavy rain warning remains in force for Fiji and people are urged to remain alert as we may have flooding in some areas.

A flood alert has been issued for the low lying areas near Labasa and Rakiraki town and also areas near the Rewa River.

There are flood warnings in place for the low lying areas near the Navua, Ba and Nadi rivers.

Tropical Cyclone Winston which has been termed a Monster Cyclone has left a massive trail of destruction.

Many houses have been badly damaged in Rakiraki, Tavua, Ba, Lautoka, Savusavu, Lau, Taveuni and Nausori.

A number of houses had their roofs blown away.

We also received reports of some families stuck in their homes in these areas late last night.

Some were trapped under collapsed roofs, ceilings and walls.

We also contacted DISMAC and Police and they carried out rescue operations in a number of areas.

Some areas have been inaccessible due to fallen trees, debris and fallen power lines and electric poles.

Many residents who we have spoken to said that they have never experienced the effects of such a monster cyclone.

The National Disaster Management Office Director Akapusi Tuifagalele said they are aware of the destruction around the country.

Tuifagalele is advising the public to restrict their movements and stay indoors as the curfew is still in place for the whole of Fiji until a meeting at 11am today.

People will be without power for the next few days as the Fiji Electricity Authority has said they will send out a response team after assessing the situation today.

The FEA said it would take a few days to carry out repairs.

The Ministry of Education has confirmed that all schools will be closed until further notice.

Police are trying to contact Koro Police Station to get the investigation report on an elderly man who passed away in Koro yesterday.

An elderly man of Navaga in Koro Island was the first victim of severe Tropical Cyclone Winston after a roof fell on him.

Inspector Josaia Weicavu said other details about the deceased will be released once they confirm it from Koro Police Station.

Posted by Fijivillage on Saturday, February 20, 2016