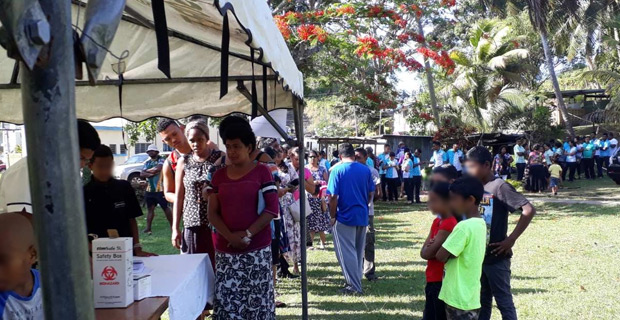 Minister for Health, Dr. Ifereimi Waqainabete says the Ministry of Health is working hard to finish all mass vaccination for measles before Christmas to be able to lift all restrictions before New Year's Eve.

Dr. Waqainabete says over 200,000 people have been vaccinated against measles since the outbreak was declared.

Dr. Waqainabete says health teams are going to rural settlements to immunise people in the target groups in the Western Division.

He says although people in the outbreak areas have been vaccinated, they still are vulnerable to getting the disease within 4 to 10 days after getting vaccinated.

Dr. Waqainabete says the cost of vaccination has reached over $2 million dollars and by the end of the campaign it can cost almost $5 million dollars.

He is again advising all Fijians not to host any mass gatherings as per the Ministry's advisory.

The Minister is also urging all Fijians to go to their nearest health centre and get vaccinated.

There are now 21 confirmed cases of measles in Fiji and Dr. Waqainabete says all patients are in stable condition and most have been treated and sent home.

The Minister says that the two new cases of measles, a 13-year-old child from Nasilai Village in Nakelo, Rewa and 27-year old woman from Saumakia Village in Naitasiri were directly in contact with those people who were earlier diagnosed with measles.

Dr. Waqainabete says the 13-year-old boy from Nasilai Village in Nakelo, Rewa is the son of a measles patient who is currently being treated.

The 27-year old woman from Saumakia Village in Naitasiri is the babysitter of the 9-month-old baby from Davuilevu who also has measles.

The 21 cases to date are from the following areas in the Central Division:

The Ministry says the vaccination campaign in the North will begin tomorrow.

The Health Ministry says that pregnant women, babies under the age of 6 months, those with a compromised immune system and those with a known allergy to the vaccine should not be vaccinated.

It says people aged 40 and over will not be vaccinated as they are likely to have had measles as a child and therefore have life-long immunity.