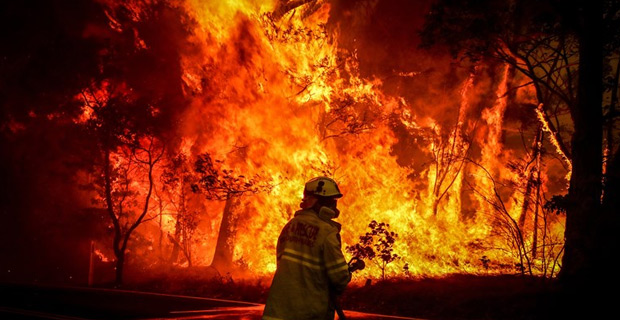 Thousands of Australian families have lost their homes, farms, businesses

Bush fire conditions eased in Australia yesterday after a grueling night for firefighters, with authorities saying they expect at least a week of milder weather in which to step up defences against the huge blazes still burning.

New South Wales police say that areas not affected by the bush fires of the South Coast, a popular holiday destination, are in a position to reopen for business, although national parks remain closed until 1 February.

Officials have been urging foreign tourists to continue visiting Australia, which depends on income from tourism as the industry accounts for 3.1 percent of the country's gross domestic product.

Sydney thanks all our heroes.

Thank you for your sacrifice, we couldn't survive without our volunteer fire fighters!

Thousands of Australian families have lost their homes, farms, businesses, and far worse, some people have lost loved ones.

We are calling on all Fijians in Fiji and abroad to become part of CFL’s Australia Bush fire Victim Appeal and donate to help our brothers and sisters in Australia.

Funds raised through CFL’s Australia Bush fire Victims Appeal will be given to the Australian Red Cross.

Donations can be made through deposits in Westpac account number 9800935794. People can also make donations through their M-PAiSA account by using the M-PAiSA app where people will have to go to the business payment section and select Australia Bushfire Appeal and enter the amount.

CCTV cameras will soon be installed in locations around Nausori Town to help Police deal with growing concerns about the increasing number of criminal... 49 minutes ago
LATEST NEWS

A 19-year-old woman will give evidence in her uncle’s rape trial which will begin next Wednesday. Suva High Court Judge Justice Salesi Temo was ... 46 minutes ago