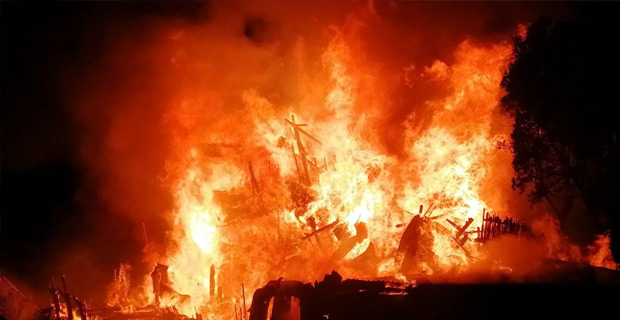 the fire was the biggest Tapu Te Ranga Marae had ever seen.[Photo:Stuff.co]

A group of 20 Scouts were among those who escaped as a Wellington marae burnt to the ground in the early hours of Sunday morning.

One firefighter was taken to hospital after fighting the fire at Tapu Te Ranga Marae, in the suburb Island Bay.

When the fire was called in at 12.30am firefighters found the multi‑storey, wooden meeting house consumed by fire. Before and after shots of the Marae

A Fire and Emergency spokesman said the fire destroyed the marae's main building but a separate meeting building was saved.

A 27-year-old priest from Vuqele in Tavua who was in the middle of preparing for his wedding in July is still in shock after a fire destroyed their ... 47 minutes ago