Finance Minister provides breakdown of Head 50 in the budget

Finance Minister provides breakdown of Head 50 in the budget 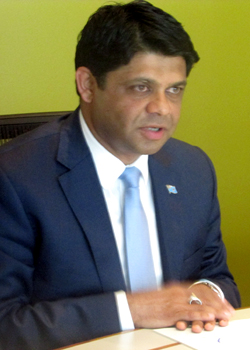 Finance Minister, Aiyaz Sayed-Khaiyum has clarified that the $100M under Head 50 of the Miscellaneous Services in the National Budget is not unaccounted for as some claim.

Sayed-Khaiyum has provided the breakdown of Head 50 for the last 15 years.

He says the $100M was very loosely referred to as the average amount allocated to Head 50 over a period of 15 years.

The Finance Minister raised concern that this was taken out of context by some in the Opposition as well as the media said that this amount was unaccounted for.

He says in this particular case during the Public Accounts Committee meeting a question about Head 50 was asked to an officer who was not the relevant officer to answer the question.

He adds the officer was from the Audit division who unfortunately said they cannot account for it whereas the question should have been put to the Budget Division.

Sayed-Khaiyum says a letter was then written by the permanent secretary to the chairman of the Public Accounts Committee that a detailed response will be provided.

According to the information provided the funding provided under Head 50 includes the contingency funding and other common central pool of funds that are available to the whole of government.

The increases recorded are largely attributed to the new initiatives introduced by government over the years.

He says they refused to answer questions from the Fiji Times who have been pursuing this matter as they wanted to follow the proper path.

Sayed Khaiyum says the breakdown of Head 50 for the last 15 years was provided to the Secretariat of the Public Accounts Committee.

Meanwhile the Chairman of the Public Accounts Committee Biman Prasad confirmed receiving the analysis from the Ministry which they had requested and the committee will deliberate on that further before making any decision.

Prasad adds that it is not right for the Attorney General to comment on the work of the Public Accounts Committee.

Sayed-Khaiyum says these comments are made after approval from the Speaker of Parliament Dr Jiko Luveni as members of Parliament were not allowed to comment in the public space regarding matters that were before the committee.

He adds the Speaker was approached on Monday and she gave clarifications yesterday that she notes his concerns and intention to issue a public statement and confirm that there is no specific Standing Order prohibiting this.

Breakdown of Head 50 provided by the Finance Minister.

A man who was employed by an electrical contractor and fell from a power pole and injured himself on the 9th of this month at Malau in Labasa passed ... 5 hours ago