Fijian Elections Office to use process of verifiability in next elections

Fijian Elections Office to use process of verifiability in next elections 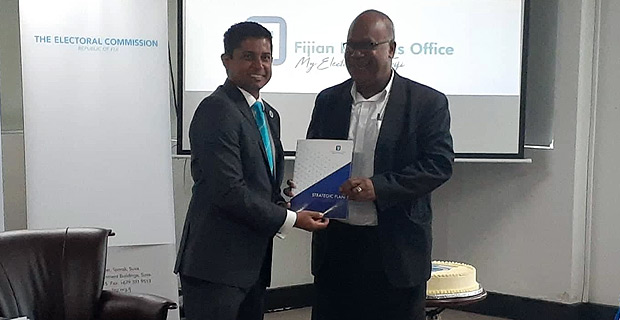 Today also marks the one year anniversary of the 2018 elections.

The Fijian Elections Office will be using the process of verifiability in the next elections.

Verifiability is an accounting concept that states that it should be possible for an organization's reported results to be reproduced by a third party, given the same facts.

Supervisor of Elections Mohammed Saneem says there are a lot of people trying to create misinformation and doubt and it was seen in the last elections.

Saneem says they are confident in their process to the point where even if someone else does the same process they will come up with the same results.

He adds the idea is to have all the process verifiable and be assured.

Saneem made these comments during the FEO 2020-2023 Strategic Plan launch this morning.

Saneem says cooperation with business and financial institutions will be boosted through opportunities to promote voter participation such as NGOs, political parties, youth groups and media.

Saneem says the FEO is also intending to mobilise mobile-based solutions for the monitoring and handling of various processes in the operational delivery of elections; looking at more apps to make work easier.

The staff of the Elections Office were also given an award for their work towards the compilation of the strategic plan.

Today also marks the one year anniversary of the 2018 elections.

Australia's second-largest city has begun a second lockdown in response to a spike in new coronavirus infections. Melbourne's five million ... 48 minutes ago