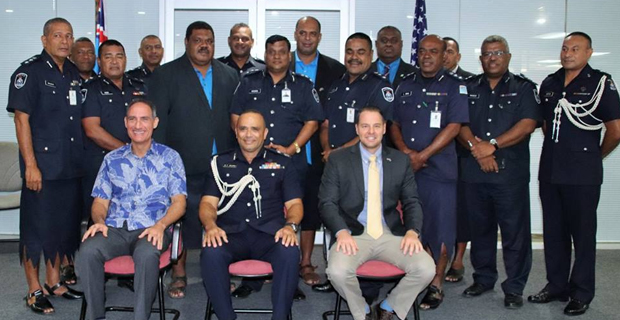 The Fiji Police Force will be sending for the first ever a Formed Police Unit to the United Nations and regional peacekeeping mission after they signed a Letter of Agreement with the United States of America to assist the training and deployment of Fijian Police Peacekeepers.

While speaking at the signing, Police Commissioner Sitiveni Qiliho says this has come after the Prime Minister made a commitment to the UN and they will now have to relook at their training to meet that commitment.

Qiliho says they are thankful to the American government for the opportunity as Fiji has never sent a Formed Police Unit to any of the UN peacekeeping missions.

He says they were only sent as individual observers.

QIliho says they will now send a Formed Unit which includes vehicles and other things that is needed for a specific mission.

He says training for the deployment of a formed unit can start as earlier as next week and they will have to make sure that the training matches the requirements in order for the Formed Unit to be sent.

Qiliho says they are aiming to train 120 to 150 officers for the mission and the first batch will only be deployed after the UN counterpart has conducted their assessment on the training processes.

They are also aiming to make it a Melanesian Spearhead Group Unit later on by getting elements from our neighbouring islands to be embedded in Formed Police Unit.

Good news for students as all sporting competitions including the Coca Cola Games and Vodafone Deans Rugby Competition will go ahead this year. Edu... 7 hours ago
LATEST NEWS

People living in Tropical Cyclone affected areas can expect more assistance after BRED Bank Fiji made a cash donation of $112,500 to the Prime ... 6 hours ago

Unscrupulous traders have been warned as smuggled goods such as adults and children's wear, school bags and imitation jewellery have been seized by ... 6 hours ago

A man who was employed by an electrical contractor and fell from a power pole and injured himself on the 9th of this month at Malau in Labasa passed ... 6 hours ago

The solution is clear - free tertiary education for all students. That is the comment from SODELPA leader, Viliame Gavoka who is calling on ... 7 hours ago

If you are living in low lying areas and areas adjacent to rivers and streams from Serua to Togalevu in Viti Levu, and Vanua Levu and surrounding ... 7 hours ago
More News
TOP