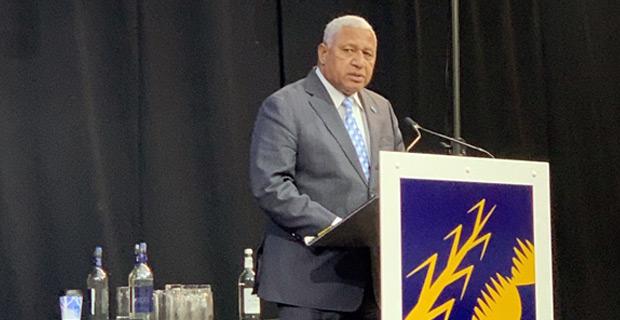 Prime Minister, Voreqe Bainimarama says Fiji strongly condemns the terrorist attack in London and their prayers are with all those affected by this tragedy.

Bainimarama who arrived in London earlier this week for the 56th Session of the International Sugar Organisation Council Meeting has tweeted that the real heroism of the people of London and security forces during and after the attack was remarkable.

Fiji strongly condemns the terrorist attack on #LondonBridge. Our prayers are with all those affected by this tragedy.

The real life heroism of the people of London and security forces — during and after the attack — has been remarkable. True courage! 🇫🇯🇬🇧

Bainimarama says the people of London have shown true courage.

The man who carried out the stabbing attack at London Bridge was a former prisoner convicted of terrorism offences.

The attacker, named by police as 28-year-old Usman Khan, was out of prison on licence at the time of the attack, in which two people were killed and three were injured.

He was shot dead by officers after members of the public restrained him.

Khan was known to the authorities, having been convicted for terrorism offences in 2012.

The Acting Permanent Secretary for Health, Doctor James Fong says the 66-year-old man who tested positive for COVID-19 after returning from India does... 10 minutes ago
LATEST NEWS