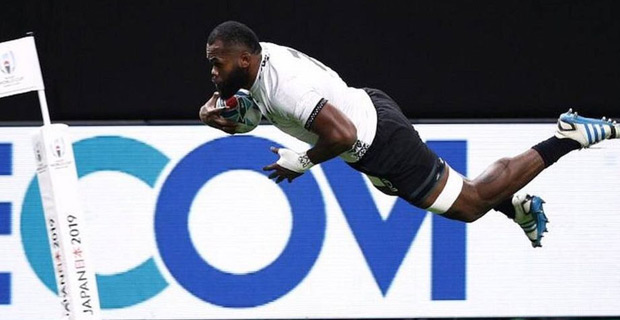 A strong and impressive first half performance from the Fiji Airways Flying Fijians stunned the Wallabies this evening but it was not enough to earn them a victory as they went down 39-21 at Sapporo Dome in Japan.

Fiji led on the scoreboard for most of the match and even delivered a 14-12 lead at halftime.

Fiji had 68 percent of the possession in the first half.

A yellow card to centre Levani Botia in the 61st minute affected the outcome of the match.

There were impressive individual performances from the Flying Fijians across the park as players such as Peceli Yato, Josua Tuisova, Semi Radradra, Frank Lomani and Waisea Nayacalevu stood out.

Huge power from Fiji! Follow the game LIVE, link in our bio.

The first points on the board by the Flying Fijians came from Flyhalf Ben Volavola through a penalty kick in the 4th minute.

Fiji’s first try was scored by Peceli Yato in the 7th minute.

Yato’s try was the result of great team work through open play as Josua Tuisova broke through the defence and kept the ball moving to Yato who managed to score in the corner.

The Wallabies first points on the board came from Captain Michael Hooper who scored in the 17th minute.

This was followed by two successful penalties by Volavola.

Fiji opened the second half strongly as Waisea Nayacalevu scored a try in the 43rd minute.

Nayacalevu intercepted a pass and ran more than 50 metres to score under the posts.

This was then followed by four tries and one penalty for the Wallabies.

Kerevi is the first Fijian born player to score a try against Fiji at the Rugby World Cup.

He was also awarded man of the match.

Flying Fijians Captain Dominiko Waqaniburotu says they cannot blame anyone for their loss and now need to move on and focus on their next game.

Coach John McKee says they made some simple mistakes in the game.

In other matches, France and Argentina face off at 7.15 tonight while the All Blacks and Springboks clash at 9.45 tonight.