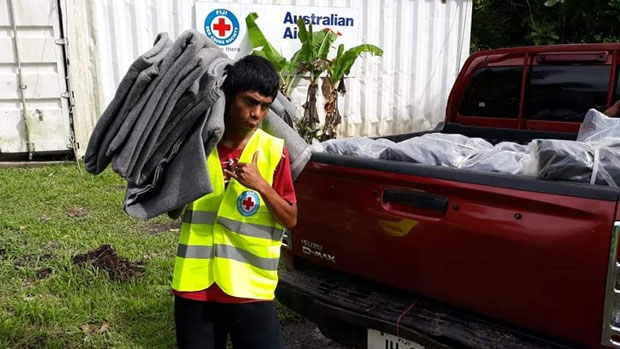 A member of the Red Cross team busy distributing blankets to people whose homes have been damaged by TC Tino. [image: Red Cross Fiji]

The Red Cross teams are distributing shelter items, blanket, clothes, hygiene kits, mosquito nets and tarpaulins to people whose homes have been damaged.

Operations Manager, Patiliai Leqa says their team of 5 volunteers will leave for the Lau Group with the National Disaster Management Office and will also be assisting them to conduct the initial assessment damage.

Leqa says their team have provided immediate relief items to 12 households in Savusavu and Rabi Island affected by Tropical Cyclone Tino over the weekend.

He says after TC Tino, their teams have assessed 50 communities in the Northern, Western and Eastern Division.

Leqa says the Red Cross Society teams have assisted a total of 116 households affected by TC Sarai and TC Tino till date.

He says 104 households have been assisted in the Western, Northern and Kadavu who were affected by TC Sarai.

Leqa says they are working with the government to assist more people who are in need of help.