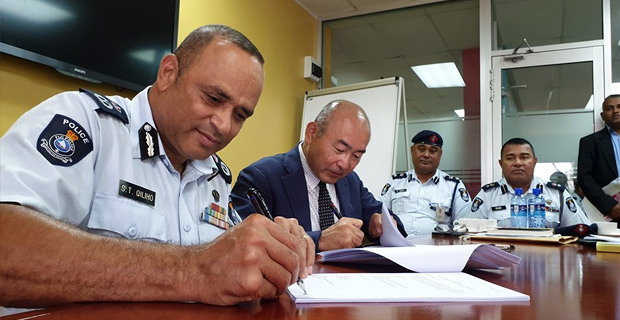 The Fiji Police Force maritime search and rescue efforts will be boosted through the supply of specialized equipment which includes vessels worth up to $6 million.

This comes after they signed off on a finalized procurement list with the Government of Japan for the supply of the equipment worth up to $6million under Japan’s Grant Aid “Economic Social Development Program.

In December 2018, the Government of Japan pledged its support towards the procurement of maritime safety and security equipment for the Fiji Police Force

The signing between the Commissioner of Police, Sitiveni Qiliho and the Advisor and Country Assistant Division 1 at the Japan International Cooperation System, Kenji Maeda.

Qiliho says the Fiji Police is grateful to the Japanese Government in recognizing the need for the specialized equipment, as they are the first responders during any natural disasters considering our officers are based throughout Fiji.

He says the discussions held today between Maeda and their operations and administration team was to finalize the list of equipment ranging from diving apparel right up to specialized maritime equipment and vessels to be used in their search and rescue efforts and investigations.

The Commissioner says with Fiji becoming more prone to natural disasters, it was great to have the support of the Japanese Government in assisting the Fiji Police to improve its maritime capabilities in coastal areas and maritime islands with increased inter‑island movement.

The first delivery of equipment is expected to arrive in Fiji in six months time.