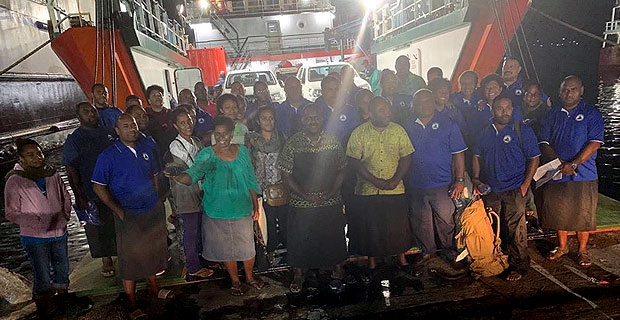 Minister for Health and Medical Services Dr. Ifereimi Waqainabete welcomed the Fiji Emergency Medical Assistance Team that returned from Kadavu after its first domestic deployment in the wake of the recent Tropical Cyclone Sarai.

The 23 member team left for Kadavu last Friday on board the Government medical boat MV Veivueti and during the week-long deployment to Kadavu, the team managed to conduct 154 patient consultations, three major and four minor surgeries, 2 medevacs, and 5 cases were brought to Suva for further care.

Dr. Waqainabete says he was happy to say after the verification of the Fiji Emergency Medical Assistance Team, they have within the Ministry the capacity and capability to respond to natural disasters which is a proud moment for them.

Nutritional assessments were also undertaken for vulnerable children as well as for adults to ensure that food and nutritional security is intact for the people of Kadavu.

A team of carpenters had also been dispatched to conduct minor repairs to the roofing of the health facilities in Vunisea and at Kavala Health Centre that had sustained damage.

Up to 85 percent of the people on Kadavu were visited by the team and a small health team still remains on Vunisea supporting the local staff to achieve a 100 percent coverage of the people of Kadavu.

Waqainabete while acknowledging NDMO, Government Shipping, and partner agencies said that Fiji Emergency Medical Assistance Team will continuously strive to improve its emergency and disaster response and it was a great achievement to have successfully deployed for the first time and serve the people of Fiji.

CCTV cameras will soon be installed in locations around Nausori Town to help Police deal with growing concerns about the increasing number of criminal... 55 minutes ago
LATEST NEWS

Fiji’s seasoned diplomat and former Minister for Foreign Affairs, Ratu Inoke Kubuabola has been nominated as Fiji’s candidate for the position of ... 2 minutes ago

A 19-year-old woman will give evidence in her uncle’s rape trial which will begin next Wednesday. Suva High Court Judge Justice Salesi Temo was ... 52 minutes ago