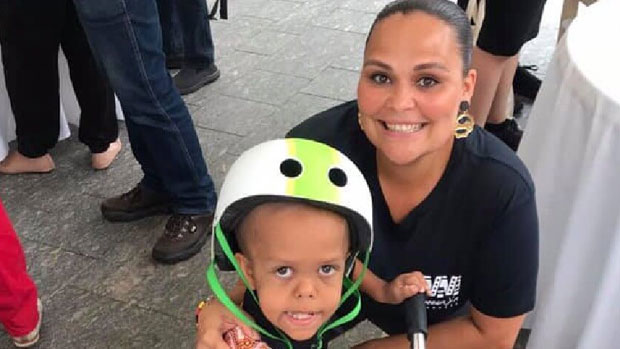 9-year-old with his mother [Photo: CNN]

Fiji Airways is donating plane tickets so a 9-year-old Australian boy with dwarfism who was being severely bullied in school can go to Disneyland with his mother.

9-year-old Quaden Bayles was diagnosed with achondroplasia – the most common form of dwarfism – just three days after he was born has long suffered at the hands of bullies and online trolls.

News.com.au reports that one day, his mother filmed his tearful outcry and put it on Facebook to let people know the effect that bullying can have.

Quaden is a 9 year old Australian boy with dwarfism. He is constantly being bullied at school to the point that a video of him talking to his mom about suicide went viral. You are not alone habibi I stand with you Quaden and against bullies! pic.twitter.com/ku8G3WG7rT

The bullying was so severe, in the video Quaden can be heard saying “Give me a knife—I want to kill myself.”

US Comedian Brad Williams set up a GoFundMe to let Quaden know that bullying will not be tolerated, and that he is a wonderful human being who deserves joy.

Williams says he wants to fly Quaden and his mother to America, get them a nice hotel, and take them to Disneyland.

He called on people to show Quaden and others, that there is good in the world and they are worthy of it.

The world has rallied around this 9-year-old boy bullied at school for his dwarfism.

Hugh Jackman posted a video telling him "you've got a friend in me," and US comedian Brad Williams has raised enough money to send him and his mom to Disneyland. https://t.co/i0f0Qrd2yx

382, 000 dollars has been raised through GoFundMe so far.

On Twitter, Williams wrote that Fiji Airways has informed him that they will be donating plane tickets so Quaden and his Mom can get to Disneyland.

Williams further said that he could not stop crying and promise to make sure every penny goes to a good cause!

Fiji Airways has confirmed that they are donating the plane tickets to Quaden and his Mom.

Bayles also has the support of the National Rugby League's Indigenous All-Stars team.

This is a gut wrencher. We all love you young man. God is always there with infinite Love Grace and Mercy...https://t.co/X8mezWuswe via @theblaze

The youngster will lead the team out before tonight's NRL pre-season match against the Maori All-Stars in Queensland's Gold Coast.

Bayles is receiving a massive outpouring of support from around the world.

Among them is Australian actor Hugh Jackman, who posted a video message to Twitter telling Bayles: "No matter what, you've got a friend in me."