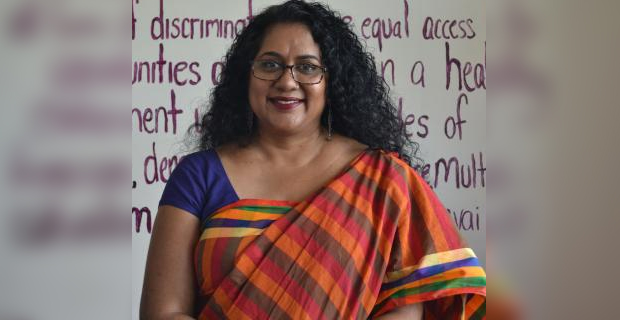 The Fiji Women’s Rights Movement strongly condemns the horrific and brutal killing of Fijian women in intimate partner violence and stands with women across Fiji to call for action.

The most recent case involves the tragic death of a 35-year-old mother of a 2‑year‑old in Labasa at the alleged hands of her estranged husband.

FWRM Executive Director, Nalini Singh raises the question on  when will society decide that enough is enough.

She says women and children should be safe in their homes, schools and workplaces.

Singh says recent cases that have captured media attention include two young women that were allegedly murdered by their partners earlier this year.

The victims were killed in separate cases within a week and one of the women was pregnant.

An Australian woman was also allegedly killed by her partner in Fiji last month.

According to FWRM 2017 research, it takes women over 2.5 years to report their issues of violence.

"FWRM strongly condemns the horrific & brutal killing of Fijian women in intimate partner violence & stand with women across Fiji to call for action. When will these stop?" PR: https://t.co/53Ay4zl7ke pic.twitter.com/jt7vFNMqOi

Singh says women experience real fear when they decide to leave abusive relationships but this does not stop the violence.

She says instead, they see calculated ways in which the women are stalked, shamed, harassed, assaulted and even murdered.

Singh also says according to the Fiji Women’s Crisis Centre statistics, as of June 2019, there have been 295 cases of domestic violence in Fiji within 180 days.

She says it is appalling that the statistics continue to reflect a grim and horrific reality for women when Fiji has progressive laws in place such as the Family Law Act, Crimes Act and Domestic Violence Act.

Singh says it must translate to meaningful change in the Fijian communities, which requires attitudinal change.

FWRM says it also recognises the efforts by the government towards the elimination of violence against women.

She says it was encouraging to see members of Parliament condemn domestic violence strongly but it is also crucial to exercise great caution and not lose sight of the issue at hand, which needs to be addressed.

Singh also says that real change starts from our attitudes and what we are teaching our children and families at home.

She says we need to call out bad behavior that is abusive and normalises violence in every location and situation.

FWRM also says violence against women is an epidemic in Fijian society, and it is not limited to one particular ethnic group nor did any ethnic group introduce it in society.