Each lump of coal represents a nail in our coffins - Rev. Bhagwan

Each lump of coal represents a nail in our coffins - Rev. Bhagwan 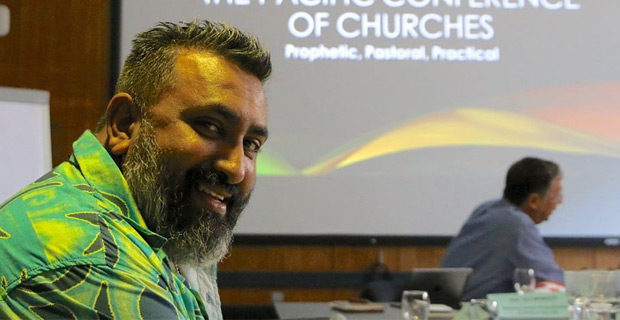 The General Secretary for the Pacific Conference of Churches has told Australia’s Prime Minister Scott Morrison that the coal industry is killing the Pacific region.

Climate advocate Reverend James Bhagwan made the remarks at a panel discussion at the COP25 climate conference in Madrid, Spain.

Bhagwan says as much as he loves Morrison as a Christian brother, each lump of coal represents a nail in our coffins and to our crosses.

Without singling Australia out Bhagwan used the biblical story of the good Samaritan to describe the role of some actors in the region, who claim “they are part of the Pacific family but leave us lying, bleeding, dying on the side of the road.”

Bhagwan says when Pacific nations were facing obliteration they are hearing words like ‘come and pick our fruit’.

He says that’s not very loving as a neighbour referring to comments by Australian Deputy Prime Minister Michael McCormack.

Earlier this year, McCormack trivialised the plight of Pacific islanders by suggesting that even if their homes were swallowed up by rising sea levels, Pacific people would survive because they could come to Australia to work in the agricultural sector as fruit pickers.

High Level Press Conference: Not without my neighbour (HL) (Tuvalu Climate Action Network (TUCAN), Oxfam and Greenpeace) from SPREP IT on Vimeo.

A group of people have come from Nadroumai Village in Nadroga to support Swire Shipping Fijian Drua centre Kalaveti Ravouvou against the Chiefs in ... 12 hours ago