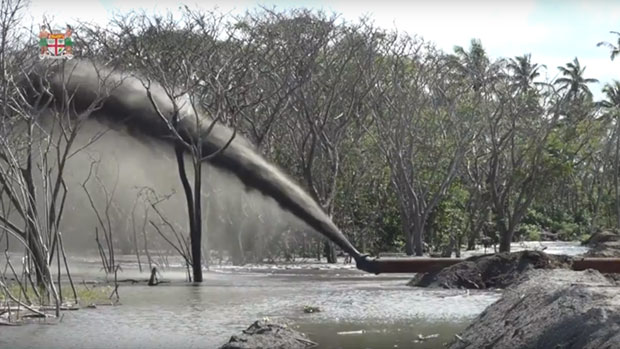 The stockpile of sand that has also resulted in the drying up of trees and vegetation along the Sigatoka River is not from the exploration works being carried out by Magma Mines but it is from dredging works conducted by China Railway Company between 2016 to 2018 for flood mitigation.

The briefing from the Permanent Secretary for Waterways, Joshua Wycliffe to the Prime Minister confirms that dredged materials were dumped on the approved dump sites through the Environmental Impact Assessment process and upon the mataqali giving consent to dump on their land.

In his briefing Wycliffe said that due to the sand materials, the existing greens has died and will naturally rejuvenate its greens over a lapse of time. He says this was the same practice and have rejuvenated greens for the Rewa River, Navua River, Nadi River, Ba River and Labasa River dredging projects.

He says the Sigatoka River dredging project was planned under the Land and Water Resource Management Division then under Ministry of Agriculture in 2016 to 2018.

You can check out the video of the dredging works by China Railway Company taken by Department of Information in June 2018.

Wycliffe says after the regulatory requirements were met like – the EIA approval from Department of Environment,  the waiver of fishing rights, the Director of Lands Approval and the approval from landowners for use of land to dump dredged material - the tender was advertised and the government tender board approved ‘China Railway Company’ to undertake the dredging project.

Minister for Waterways, Agriculture and Environment, Doctor Mahendra Reddy confirms the site in Sigatoka which was visited by Opposition parliamentarians yesterday was the site for the Sigatoka River Dredging project.

It is the site where sand that was being dredged from the river was being dumped.

Reddy says they dumped the sand on the site where the villagers agreed but villagers then said they did not want it there so the dredging stopped.

He says their officers went to the site today to conduct checks.

When asked about the damage to the trees and vegetation at the site where the sand was being dumped, Reddy said they will need to examine that.

When further asked about the 900 people that signed SODELPA MP Viliame Gavoka’s petition being concerned about their food sources, Reddy said people that have concerns should go to the Ministry of Environment.

SODELPA MP, Viliame Gavoka says it is pathetic for the Minister for Lands and Minerals Resources, Ashneel Sudhakar to say that some landowners were given blank papers to sign and that they had no idea it was a petition for SODELPA.

This is after Sudhakar claimed that the photos that are now circulating from Sigatoka are not from the actual exploration site at the Sigatoka River Mouth but from somewhere else, and he also claims that some landowners have told them that they were told to sign on blank paper, not knowing it was a petition for SODELPA.

When questioned on this by Fijivillage, Gavoka claims their petition followed the law.

Although no mining lease has been issued to Magma, Gavoka says mining in the area will involve around 131 million tonnes of sand, something which Fiji has never seen and it is something that can totally change Sigatoka.

However, Sudhakar stresses that consultations were done with the villagers before exploration works began.

He says the 7 villages who have signed the petition were also part of the consultation on several occasions and maintains that they had no objections.

Sudhakar says the license is only given when 60% or more of the landowners are in agreement.

Sudhakar also says that some villagers have approached them with claims that they were asked to sign on blank paper and had no idea that they were signing a petition.

Sudhakar says that tests are done by his team every 3 months to ensure that the water and fish around the exploration site are safe and there have been no issues so far.

He says landowners can only oppose the license when consultations are done and the license can then only be cancelled by the Ministry when the company breaches the contract.

Sudhakar says landowners cannot just turn up to them all of a sudden and ask for the license to be cancelled.

He says the company also has to pay a bond to the Ministry, which is paid to the landowners as compensation if any damage is done to the ground.