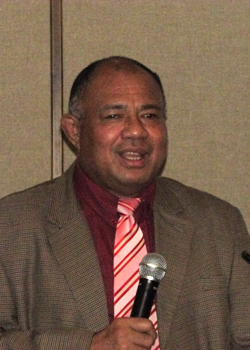 Fiji’s National Security and Defence Strategy will ensure that another coup will not happen.

Chairman of the National Security and Defence Review committee Esala Teleni says if Fiji does not have a solid, sound and effective security system in place we will always go back to the past.

While speaking at a consultation with representatives from different government ministries, Teleni says it is important that we have a workable and responsive security system that will be able to deal with both internal and external threats.

He says we had a political system that influenced the security culture of our country.

He adds that when the political system changes, the security perception of people change.

Fiji has taken the step to develop its security system ahead of New Zealand who according to Teleni have not yet formulated one.

Teleni says the National Security and Defence Strategy will also coincide with the formulation of the Republic of the Fiji Military Forces, Fiji Police Force, Immigration and Intelligence White papers.

He says the RFMF white paper has a defence policy statement by the government.

This outlines some of the issues they will need to address and also their focus because of their expanding roles.

The Fiji Police Force policy statement outlines that they should move away from being only crime focused and to also being people focused.

Consultations on the Review of our National Security and Defence Strategy began in February this year.

The final draft report will be presented to government in August this year.

A new study of the Fiji National Provident Fund by the International Transport Workers Federation has recommended an urgent independent review and ... 7 hours ago

A new record has been set by Aminiasi Tavailagi of Ratu Kadavulevu School in the Sub Junior Boys Long Jump, and he has also qualified for the 100 ... 7 hours ago

A tough tussle is expected in the Senior Girls 100 metres final tomorrow as Mahatma Gandhi Memorial School’s Kesaia Boletanakadavu and Saint ... 7 hours ago