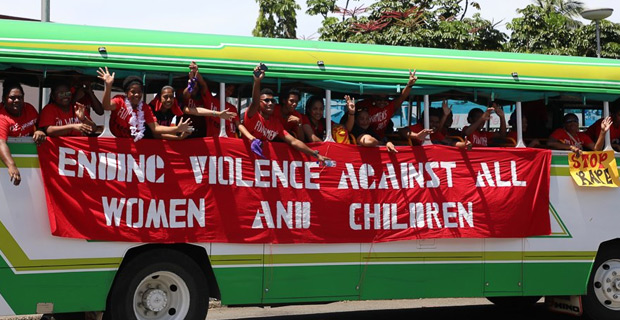 DIVA for Equality’s Freedom Bus stopped at Saweni Beach Road in Lautoka this week where three women were earlier raped in separate incidents, and some issues have been raised on how to make places safer for women and children.

This was revealed by DIVA’s Noelene Nabulivou who says they are touring Viti Levu and stopping in solidarity at places where they know women have been victims of rape or have been killed.

Nabulivou says this has raised a serious concern about gender and infrastructure.

She says the bus also stopped in Lepanoni, Deuba which is a site where several women were raped but particularly where a girl was raped and had eventually died.

Nabulivou says that since 60 to 70% of women and 80% of women in the Lesbian, Gay, Bisexual, Transgender, Intersex and Queer community face intimate partner violence, everyone in Fiji is impacted by it.

She says there is a need for a survivor-centric approach where women decide on how and when they put strategies in place and how they work on ending the violence that is happening to them.

Nabulivou adds that people have to be ready and it is the responsibility of the society and government to be ready so that when women do come out and have the strength and courage to address the violence that is happening to them, there are resources, information and infrastructure that is ready to respond to them.

The tour ends in Suva tonight after visiting several villages including Draunivi and Nanukuloa Village along the highway. They are also expected to visit Kadavu.

Asco Foundation has donated $15,000 to the Foundation for the Education of Needy Children(FENC Fiji), to assist children impacted by TC Harold and ... 31 minutes ago

FICAC has sought more time to file further information in the case of the suspended Director Intelligence, Compliance and Investigations of the Fiji ... 46 minutes ago