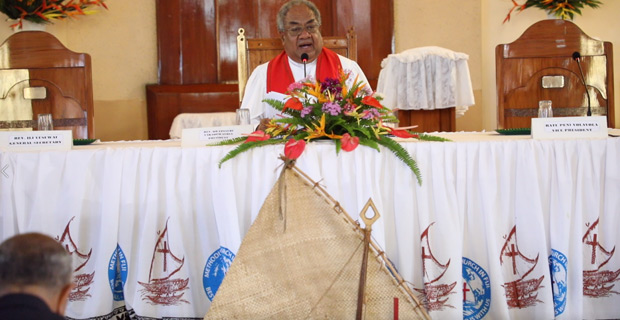 President of the Methodist Church in Fiji and Rotuma, Reverend Epineri Vakadewavosa

The President of the Methodist Church in Fiji and Rotuma Reverend Epineri Vakadewavosa has reminded the church members to refrain from living in debt as it is unChristian.

Reverend Vakadewavosa highlighted this in the Annual Conference after he announced that the church is now debt free.

He says they made a profit of $3 million and this is history for the church as they have always been in debt in the past.

He says this was possible through the timely contribution of the congregation members’ levy.

Reverend Vakadewavosa says they are also planning to upgrade Nakaora House to a 8 storey building and Epworth House into a 10 storey.

Meanwhile the Lako Yani Vou Holdings Investment CEO and Board Member of Methodist Church, Sereana Qoro says the church will have to go back to their Finance Department and plan inline with the current financial status of the church whether or not to cease all other subscriptions paid by its members.

This comes after a motion was tabled to cease all other subscriptions by the church members in the Bose Ko Viti where members will only be paying the $15 levy.

While the motion was being discussed, some members raised concerns that they have been facing problems financially and this is why they agreed with the motion while others say they should still pay the subscriptions.

She says the churches collect $3.5 to $4 million a year, and this should be enough to cater for all the expenses of the church.