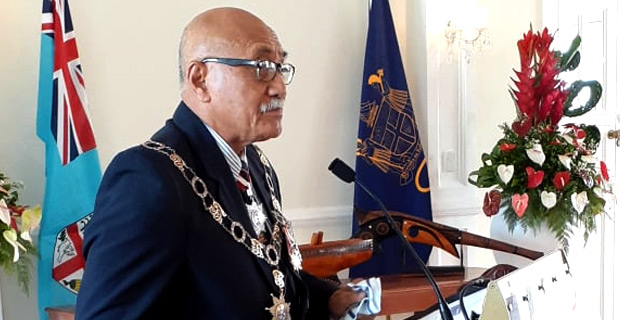 Chancellor of The Order of Fiji, President Jioji Konrote has asked the Chairperson and Members of the College of Honour to review the present Honours and Awards Act.

He has proposed that amendments should be made to allow them to honour the memories of some of Fiji’s past citizens who had served the nation with posthumous awards.

He made these comments during the investiture ceremony at the State House this morning where several Fijians were awarded medals for their contribution to our nation.

The president is urging people to be more forthcoming with their nominations to the College of Honour for deserving Fijians whom they consider to be worthy of recognition and be rewarded with an award from the Order of Fiji.

He says the Office will soon launch a website which should ease the processes by which individuals or groups could nominate personnel for the College of Honour’s consideration for awards.

He is asking people to take advantage of this new development in their attempt to improve service delivery by ensuring that deserving cases are promptly and adequately addressed.

He says as leaders, they should continue to show all Fijians that as Leaders they care for their courage, commitment, passion, patriotism and pride in serving the nation well in whatever sector or field of work they are employed in.

A minute of silence was also observed to honour the life of late Dixon Seeto, President of the Fiji Islands Hotel and Tourism Association and the Chinese Association of Fiji.

He says he values his invaluable input during the Councils’ deliberations, and they miss his intellect, wisdom, wit and great sense of humour, which he says are important personal traits for someone who had served his country for so long and well.

He says Seeto had left an enviable legacy of selfless service which should be an inspiration to everyone.

Prime Minister Voreqe Bainimarama says he will never accept the idea that even one family or one person is left behind in the modern ... 44 minutes ago

Minister for Commerce Trade, Tourism and Transport, Faiyaz Koya says he has been informed that the Maritime Safety Authority of Fiji has taken ... 47 minutes ago

FICAC has confirmed that investigations are continuing in the cases where eight Housing Authority of Fiji former employees were allegedly involved in ... 49 minutes ago