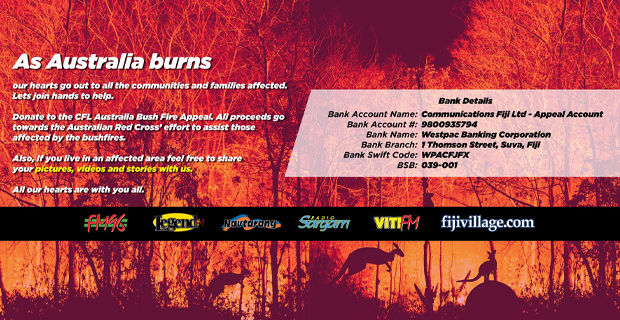 CFL has decided to start this appeal as Australia being one of our closest neighbours is going through one of the most difficult times in its history as almost 2,000 houses have been destroyed in months-long bushfire crisis and at least 25 people and millions of animals have died since September last year.

The bushfires in Australia are expected to continue for the next few months which will bring more devastation.

"When they arrived at Johnsonville, the ladies cooked breakfast for 150 firefighters" 😭❤

According to Sydney Morning Herald, the Insurance Council of Australia has estimated the damage bill had reached A$700m but said it expected the cost to rise significantly.

Scientists fear many billions of animals may have been killed by the bushfires that have swept across Australia’s south-east.

Thousands of people who have fled the blazes are uncertain if their lives will ever return to normal.

According to ABC reports, water and food is running low in many areas and the fires could intensify in the coming days as strong winds and high temperatures threaten to create even more awful conditions.

Many in Australia do not have any idea how life will be going forward and are in dire need of assistance.

The devastating fires in southeastern Australia have renewed focus on the dangers that extreme drought and heat can pose to society. @NASAEarth satellite data show smoke spreading high into the atmosphere: https://t.co/JgIvWJSbfp pic.twitter.com/wSycgzpD3C

An unusual heatwave is destroying Australia's habitat and homes. Let's call the BS out. This is NOT normal, it's because of climate change, it is an ongoing #ClimateEmergency ❗❗ pic.twitter.com/tmo7Q2QMxh

CCTV cameras will soon be installed in locations around Nausori Town to help Police deal with growing concerns about the increasing number of criminal... 16 minutes ago
LATEST NEWS

A 19-year-old woman will give evidence in her uncle’s rape trial which will begin next Wednesday. Suva High Court Judge Justice Salesi Temo was ... 13 minutes ago

US President Donald Trump has issued an executive order banning any transactions with ByteDance, the Chinese company that owns the video-sharing app ... 50 minutes ago

One more person has died from COVID-19 in Papua New Guinea, bringing the total to three. Authorities said the latest victim is a 62-year-old man ... 53 minutes ago

Unemployed Fijians took advantage of Open Market Day 2020 today at Sukuna Park which was initiated to provide a platform to showcase and sell their ... 55 minutes ago