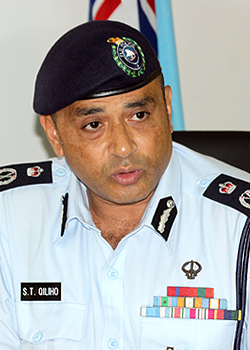 The body parts that were found yesterday at Natadola Beach will undergo a DNA test to confirm if it is the part of the remains that were recovered previously.

Police Commissioner, Sitiveni Qiliho says that he will meet the police and navy teams this afternoon.

Qiliho says he will see that the navy divers conduct a thorough search in the Natadola waters and surrounding areas.

The Commissioner says that it will be pre-mature to say anything on the conduct of investigations at this stage.

Qiliho also adds that Fiji is safe for Fijians and tourists and according to him this incident is nothing compared to what happens in other countries.

Meanwhile Police Chief of Intelligence and Investigations ACP Luke Navela says that more decomposed body remains were found by a man who was walking along the beach after which he informed the police.

Navela says the remains were wrapped in a similar manner as the last remains found at the same location.

Police say the case regarding the Russian couple has been classified as murder.

ACP Navela says the DNA tests confirm that the human remains which washed ashore at Natadola beach two weeks ago belonged to the Russian couple.

Navela says police have questioned and released their business partner who reported the matter to the police that Yuri Shipulin and his wife Natalia are missing from the 16th of last month.