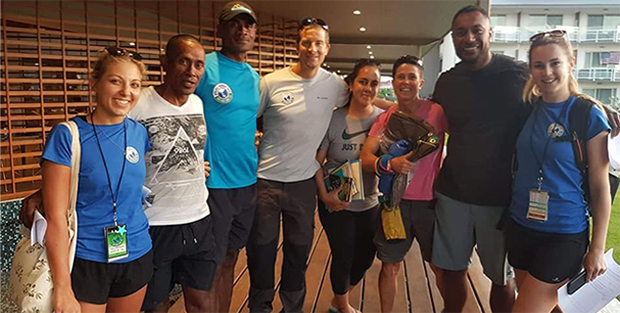 Bear Grylls, the host of famous television show Man vs. Wild is in the country for “World's Toughest Race: Eco-Challenge Fiji.”

Edward Michael Grylls better known as Bear Grylls is the host and co-producer of the Eco-Challenge Fiji show.

Eco‑Challenge Fiji is a race in which teams have to progress 24 hours a day, uninterrupted, over hundreds of miles of mountain jungles and oceans.

Each of the teams consists of four participants, including at least one member of the opposite sex and an assisting crew member who can assist from base camp.

The navigation is based on a map and a compass.

Grylls says the tracks in Fiji are incredibly demanding and will force participants to leave their comfort zone and compete against themselves, their competitors and against the strongest elements Mother Nature has to offer.

66 teams from 30 countries will be competing against each other at Eco‑Challenge Fiji.

There are two teams from Fiji that are taking part in Eco-Challenge Fiji.

They are Team Namako and Team Tabu Soro.

Each team is made up of four members.

The show will be launched in Tailevu today.

It is being produced by MGM Television and will start in 2020 exclusively on Amazon Prime Video.