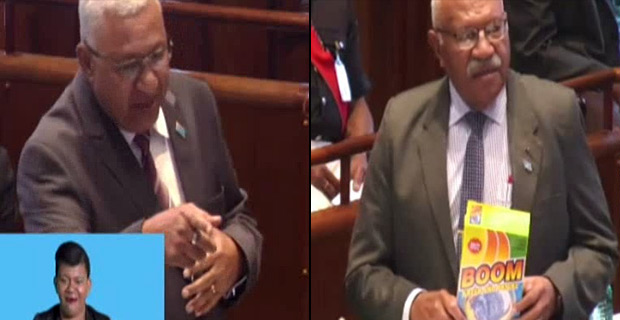 Prime Minister Voreqe Bainimarama says SODELPA Leader Sitiveni Rabuka is Mr Collapse himself and Bainimarama stresses that Rabuka is not a changed man.

While speaking during the debate on the 2019/2020 National Budget, Bainimarama says Rabuka continues on his reckless habits by misleading the people after saying that Fiji is heading to a collapse.

Bainimarama also says the Boom detergent packets that the opposition MPs are sitting with has nothing to do with the economy and the National Budget.

Bainimarama says what Rabuka has forgotten to tell everyone is that he is responsible for three devaluations - twice in 1987 and again in 1998.

He says in total, the Fijian dollar was devalued by over 50%during Rabuka’s time.

The Prime Minister says the Small and Medium Enterprise grant is about empowering people, and they are not freebies as claimed by the opposition.

He says the FijiFirst government will lead the country to yet another year of economic growth after a well thought out 2019/2020 National Budget.