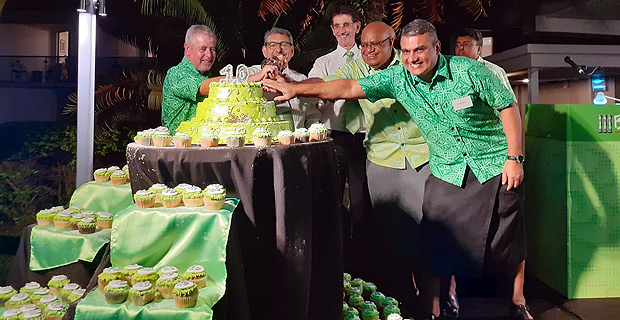 While speaking at BSP's 10th anniversary in Fiji, Chairman of BSP, Sir Kostas Constantinou says approximately 4,200 staff are employed by the bank in Fiji and the region and there is 100% local staff policy.

Constantinou says there are 119 ATM's and 2030 EFTPOS terminals in Fiji.

He says 90% of the bank's transaction in Fiji is electronic.

Constantinou says since 2010 BSP has contributed 9 million towards supporting rural communities, in projects and sponsorship in Fiji and throughout the pacific..

He adds that the bank has future plans to be the number one in lending market share in Fiji and opening a new branch in the Lau group.

Meanwhile, CEO of BSP, Robin Fleming says the bank's success has resulted from focusing on customer needs, valuing and advancing their staff and promoting them.

Fleming has thanked all the staff and customers for their support in reaching the number two position in the lending market share in Fiji.

The event was also attended by the speaker of parliament, Ratu Epeli Nailatikau, Reserve Bank of Fiji's Governor, Ariff Ali, staff and customers of BSP.

Police have confirmed that a man has passed away in the horrific crash between several vehicles in Waqadra in Nadi along Queens Highway this ... 4 hours ago
More News
TOP