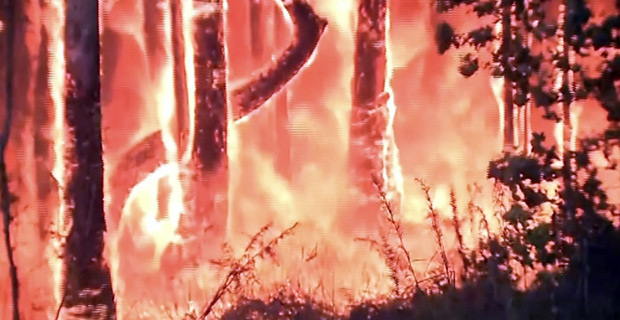 "It's like fireballs exploding in the air": One town's mayor describes the Australia bushfires [Photo:BBC]

Raging bushfires have now reached the outskirts of Sydney, destroying a number of properties.

Scores of fires are still burning in New South Wales amid temperatures of 35C and winds of 80km/h.

The number of fires still afflicting NSW ranged from 100 to 300 in Australian media reports.

BOM_au Retardant has been dropped on Sydney's north shore. The fire danger level remains "catastrophic" in parts of the city #NSWbushfires #bushfires pic.twitter.com/Vwg3neGjDp

Crews have been battling a front spanning 1,000km along the north coast of NSW, with several blazes "exceeding 100,000 hectares alone".

I live in Sydney and feel like I'm in the middle of smoke.
In the photo, That is the sun and the photo is no filter. The smoke all over the sky makes me able to take this photo.
Australia is burning. #bushfires #Australia #photo pic.twitter.com/0JjcQXg028

The Acting Permanent Secretary for Health, Dr. James Fong will hold a press conference at 3 o’clock this afternoon in relation to COVID-19. Stay wit... 21 minutes ago
LATEST NEWS