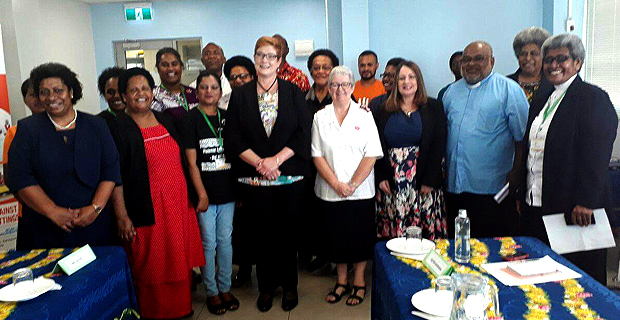 Volunteer Community Activist Saiasi Nabuta says that the visit of the Australian Foreign Minister and Minister for Women Marise Payne’s to the House of Sarah at the Moana Anglican Services Training Centre in Suva today was an important event for them as they work with victims of gender based violence.

Payne met with volunteer community activists, the first responders to Gender Based Violence victims and survivors and members of the Christian Talanoa Network, to have discussions on the prevention of Gender-Based Violence.

Nabuta says that the major challenges that they face in advocating gender based violence are the mental state that victims come with to try and go through counseling with them.

Chairperson for the House of Sarah, Reverend Sereima Lomaloma also spoke about a project known as Preventing Violence Against Women in Fiji’s Faith Settings and how it promotes safe home, safe church, and safe community.

Reverend Lomaloma also mentioned that the project is about how the leaders, members and allies of the Church can come together to prevent violence against women.

She says it describes a process of community mobilization which is an approach that engages everyone in living the faith based values of Justice, Peace and Dignity.

This year, they are working together with the Council of Churches to have this project in Tonga and Samoa to address issues on gender based violence.

Queen Elizabeth II, the UK's longest-serving monarch, has died aged 96, after reigning for 70 years. 9 days ago

AG tables Electoral Amendment Bill in parliament to be debated and voted on without delay on Thursday /+ARTICLE-281411+ARTICLE/ AG attacks the ... 27 days ago
More In Depth

Minister for Infrastructure, Jone Usamate says People’s Alliance Leader, Sitiveni Rabuka's claim that water is being carted to people from the Raint... 5 hours ago
LATEST NEWS

The People’s Alliance says for the information of the Fijian Government, this week’s meeting in the White House between US President Joe Biden ... 2 hours ago

Individuals and Small and Micro Businesses are expected to benefit from the new partnership between Fiji Development Bank and Visa Worldwide Pte ... 3 hours ago

79-year-old Marimuthu Gounder has been reported missing at the Valelevu Police Station. He was last seen yesterday morning by relatives at their ... 3 hours ago

The Fijian Elections Office will be holding a targeted voter registration drive in the Western Division from this Friday to Sunday. Supervisor of ... 4 hours ago
More News
TOP