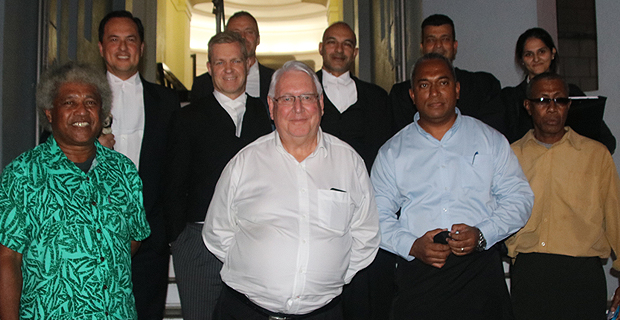 High Court Judge, Justice Thushara Rajasinghe will deliver his judgement at 11.30am next Tuesday.

While summing up the case yesterday, Justice Thushara Rajasinghe told the assessors to read the Nai Lalakai article from the minds of reasonable and fair minded iTaukei readers.

He told the assessors to take into consideration under what circumstances the article was published and to consider the reaction of the readers.

Justice Rajasinghe told the three that he does not find the opinion of Permanent Secretary for iTaukei Affairs, Naipote Katonitabua and Professor Paul Geraghty will be much help to the assessors as Geraghty has said that he did not have much interaction with the iTaukei community for the last 10 to 15 years as he was mainly teaching while Katonitabua had said that he used to talk to the iTaukei community at times.

He told the assessors to consider the truthfulness of the answers given in the caution interview.

Justice Rajasinghe says there was no investigation done to establish whether contributor, Josaia Waqabaca had given the petition to the Attorney General.

Justice Rajasinghe told the assessors to take as much time as they want because this was a very lengthy trial and also had lengthy closing submissions from both parties.

It is alleged that Fiji Times printed the Nai Lalakai newspaper which contained an article which had content with a seditious intention to promote feelings of ill will and hostility between classes of the population.