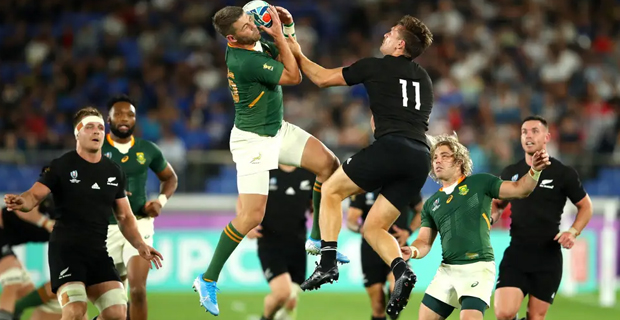 The All Blacks have begun their Rugby World Cup defence with a 23-13 victory over South Africa in a remarkable match at Yokohama which had the feel of a knockout fixture rather than a first pool game.

👀 ICYMI | Introducing the first All Blacks Haka of #RWC2019!

The Springboks started brightly and took the lead with a Handre Pollard penalty before the All Blacks hit back.

Pieter‑Steph du Toit's try and a Pollard drop‑goal made it tense before Mo'unga and Beauden Barrett penalties.

The result means New Zealand extend their winning run to 15 games in the competition, last losing to France in the 2007 quarter‑finals.

The @AllBlacks bow to the crowd to thank them for their support #RWC2019 #NZLvRSA pic.twitter.com/lpzUqWkz4Z

The All Blacks are top of Pool B with their win over South Africa, putting them in the best possible position to finish in the number one spot come the end of the first round.

Aside from South Africa, New Zealand's competition in Pool B is relatively weak by comparison.

The All Blacks face 22nd ranked Canada on Wednesday.

New Zealand is expected to win all of those matches comfortably and, if they do, would mean they'll finish top of Pool B.

After spending a month in an induced coma due to COVID-19, Dom, a 5-month-old Brazilian baby, gets to go home and celebrate his 6-month ... 17 hours ago
More News
TOP