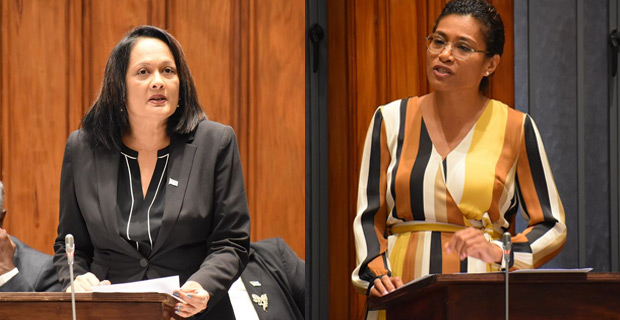 Minister for Education, Rosy Akbar has apologised to teachers in Parliament in response to Opposition Whip, Lynda Tabuya's comments about some teachers not getting paid on time.

Akbar says there are reasons why some teachers did not get paid on time adding it's not that the Ministry does not have money but issues with contracts not given on time or not signed off on time.

Akbar says as a nation, Fiji has achieved what can only be a dream for many countries.

Akbar adds what some critics describe as freebies in education is a gift to the underprivileged and the less fortunate.

She says the Government has heavily invested in early childhood and primary education because they firmly believe in a smarter Fiji and the path to knowledge based literate and numerate society is getting the basics right first.

The Education Minister adds in the not so distant past children would burn their midnight lamps and excel academically to the bliss of expecting parents and yet to be mercilessly denied tertiary education due to financial barriers.

Akbar says today every Fijian child lives with the peace of mind that his efforts will be rewarded with equal and non-discriminatory financial assistance paving the way for a brighter future.

The Education Minister says there are 195 countries in the world out of which only 24 provide free or close to free education adding she is sharing the statistics as some critics are quick to compare Fiji’s achievements with those of neighbouring countries none of which are on the free education list.
Akbar says they have increased access to learning across the board since their first electoral victory in 2014.

She says they have established 875 early childhood care education centres across Fiji, increased special needs education by 87 percent over five years across 17 special education schools, the tertiary schorlarhips and the loans board has increased the number of Fijians in Higher and further institutions of learning by 328 percent since 2014.

The Minister says they are also eliminating location as a barrier to education by subsidising the transportation of about 85,000 students in 2019.

Meanwhile SODELPA Whip, Lynda Tabuya says she gets inundated with disheartening reports about the effects of Government running out of money.

While speaking in parliament, Tabuya says she was recently informed that teachers and some civil servants are not getting paid on time. Tabuya says a delay of a single day in receiving one's wages can be very stressful on a family living from paycheck to paycheck.

She says the Government should resign as it has failed our people.

Tabuya further says that the government is not prepared to admit there is a problem and should resign.

A 37-year-old man who is alleged to have raped, assaulted and robbed a 58-year-old woman in a settlement in Suva has pleaded not guilty to all his ... 21 minutes ago

A 36-year-old man from Samabula who was allegedly found with two bags of methamphetamine and five bullets of marijuana has been remanded in custody ... 25 minutes ago

Former Lawyer Shazran Abdul Lateef and Zoe Maharaj Moore who are charged with drug-related offences will take their plea on the 22nd of this ... 28 minutes ago

Police and the Land Transport Authority of Fiji are searching for a suspect of a hit and run incident which caused the death of a man in Saweni, ... 33 minutes ago