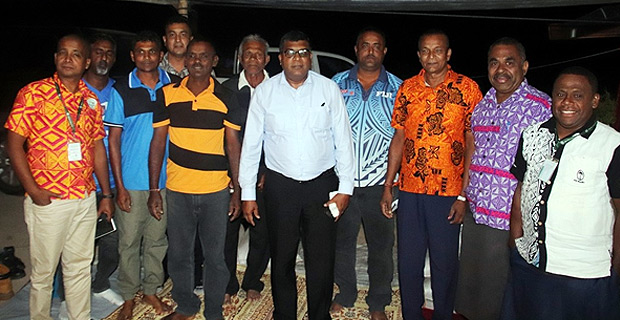 Minister for Agriculture, Dr. Mahendra Reddy with farmers of the Dramasi Rice Farmers Group in Tavua

The Ministry of Agriculture has handed over 300 kilograms of seedlings of the new rice variety, Sitara and Cagivou to the Dramasi Rice Farmers Group in Tavua.

While handing over the seedlings, Minister for Agriculture, Dr. Mahendra Reddy encouraged farmers to cultivate these two high yielding rice as they have an average yield of eight tonnes per hectare.

Dr. Reddy says about 85 percent of rice consumed in Fiji is imported, particularly from Vietnam and this seedlings will be an opportunity to provide food and income security to the communities with the ultimate objective of reducing the rice import bill of the country.

He has also assured farmers that Fiji Rice Limited is willing to buy both dry and wet rice from their farm gates, so they do not need to worry about the market of their produce.

He also encouraged farmers to grow other high-value crops such as duruka, pulses, and cassava, which would be bought by the Agricultural Marketing Authority.

The Dramasi Rice Farmers Group was formed earlier this year and consists of 10 rice farmers from the Dramasi area.