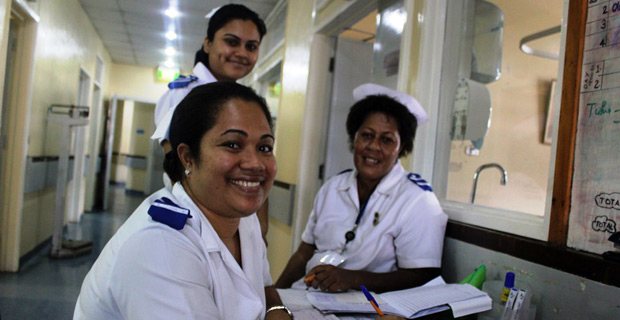 Fiji Nursing Association President, Alisi Vudiniabola says that one of the issues that was discussed in their Annual General Meeting yesterday was that a lot of nurses would like to go abroad to work and then return to Fiji.

Vudiniabola stated that a lot of nurses have suggested to the association to look for opportunities for them.

She adds that other things discussed were the extension of the Fiji Nursing Association building and the group insurance.

Vudiniabola says the AGM has voted for a group insurance and the association now has the mandate to get the insurance policy that was presented by Marsh Dominion Insurance.

She adds that they need a minimum of 500 members from the association to start the group insurance.

Vudiniabola stated that there are two plans whereby one costs $9 and the other costs $14 -$15 and the council has been given the mandate to see which one is the best.

She highlighted that it is important that members get their insurance cover done before the end of this year.

Vudiniabola has also stated that there are plans to extend the Fiji Nursing Association building and the members are willing to raise money for it.

Suva Grammar School leads the medal tally in the Boys Division at the Coca Cola Games with 5 gold, 1 silver and 5 bronze after day 2 of competition. ... 16 hours ago
LATEST NEWS

Jone Vosabalavu of Queen Victoria School has broken the Senior Boys Javelin record at the 2022 Coca Cola Games. Vosabalavu threw a distance of ... 15 hours ago

Viliame Qerewaqa of Holy Cross College in Taveuni has won gold in the Coca-Cola Games Intermediate Boys Long Jump with a jump of 6.67 metres. Pita ... 15 hours ago

Lavenia Kovanalagi has secured the first gold medal for Vishnu Deo Memorial School in the Senior Girls Discus with a throw of 36.15 metres. Tamara ... 15 hours ago

Suva Grammar School’s Frances Peters has claimed the gold medal in the Intermediate Boys Shot Put with a throw of 14.75 metres. Atunaisa ... 15 hours ago