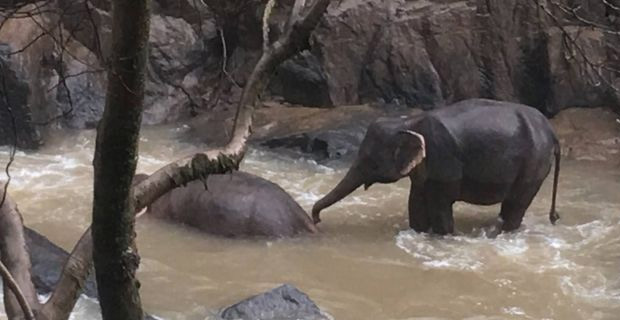 Six elephants have fallen to their deaths in Thailand while trying to save each other from a notorious waterfall.

Officials said the incident occurred after a baby elephant slipped over the waterfall in central Thailand's Khao Yai National Park.

Two other elephants were also found struggling on a cliff edge nearby, and have been moved by Thai authorities.

The waterfall, known as Hell's Fall, has a history of similar incidents.

A herd of eight elephants died after falling in 1992, in a case that brought national attention.

A 57-year-old labourer who allegedly raped his 4-year-old step-granddaughter in Ba has been charged with three counts of rape and will appear in the B... 56 minutes ago
LATEST NEWS

Ten people were arrested for breaching the nationwide curfew from 10 o’clock last night to 5 o’clock this morning with one suspect possibly ... 7 minutes ago

A Police officer has been charged with Failure to Comply with Orders after allegedly breaching the curfew over the weekend. During the curfew ... 9 minutes ago

Police in the US are struggling to control arson, damage, and looting following the death of George Floyd in Police custody. In the video footage, ... 22 minutes ago

Good progress is now being made by the Nasinu Town Council to clean up the piles of rubbish which has been building up in the Nasinu area in recent ... 42 minutes ago