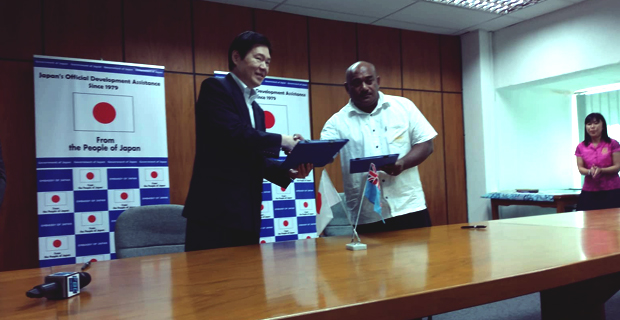 Christmas came early to 4 schools and 2 village communities as they received funding of around $1.5 million from the government of Japan.

Adi Cakobau School Principal Mrs Arieta yauvoli says the $303,910 grant that they received from the government of Japan will fund the construction of a 4 classroom blocks including a 4 pan ablution block.

Naivicula District School, School Manager Ananaiasa Taburokoroko Says that the $189,147 grant that his school received will go towards the construction of a 3 classroom block.

Tagaqe District School Headteacher William Tabua says they will use their funding of $187,000 for the construction of a 3 classroom block.

Each school will also receive new Sets of desks and chairs.

Vatukarasa and Nakorovou village received a grant of $201,563 Habitat for Humanity Director Masi Latainara says that the funding will go towards the construction of a water system for the two respective villages.

Japan’s Ambassador to Fiji,  Masahiro Omura says the Government of Japan has been funding assistance programs in Fiji ever since the 1990sChrr and has funded a total of 372 projects amounting to 25 million dollars.