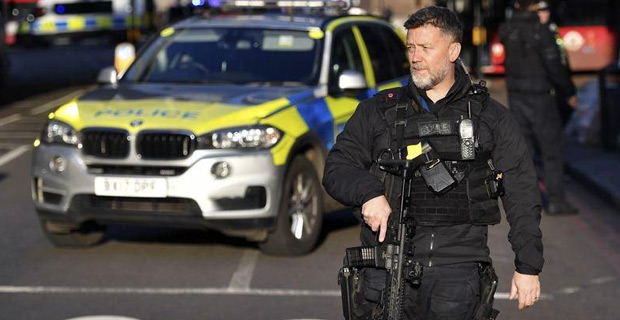 Two people have died in a stabbing attack at London Bridge, in which police shot dead the suspect.

A further three were injured in the attack - declared a terrorist incident - and are being treated in hospital.

The suspect, who died at the scene, was wearing what is believed to have been a fake explosive device.

Videos on social media appear to show passers-by holding down a man. An officer arrives, seems to indicate to the group to move, and fires a shot.

A BBC journalist who was at the scene as it unfolded, said he had seen a struggle on the bridge, with several men restraining one man. Police then arrived quickly and a number of shots were fired at him, he said.

"My heart goes out... to everybody who has been affected by today's terrible and mindless events"

In footage shared on social media, the man could be seen being pinned down by members of the public. Another man in a suit could be seen running from him, having apparently retrieved a large knife.

Earlier, Neil Basu, the head of UK counter-terrorism policing, said in a press conference that male suspect was shot by specialist armed officers from City of London police and he can confirm that this suspect died at the scene.

Minister for Defence Inia Seruiratu says the government is committed to equipping and resourcing the Fiji Police Force but he has also urged new ... 3 hours ago