2 dead and 3 injured in stabbing attack at London Bridge

2 dead and 3 injured in stabbing attack at London Bridge 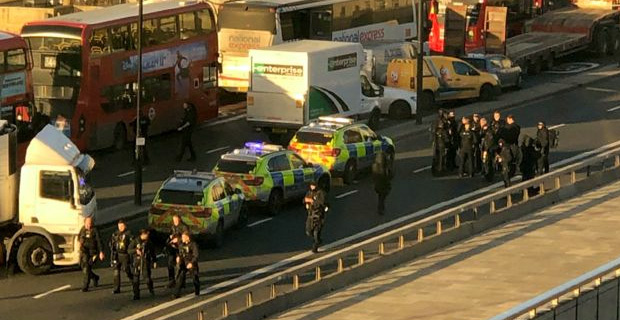 A number of other people have been injured, some seriously [Photo:BBC]

Two members of the public have died and another three people were injured in a stabbing attack at London Bridge.

The stabbing attack, which has been declared a terrorist incident, began at an event at Fishmonger's Hall.

Within five minutes of being called officers confronted the suspect - who was shot dead by police.

The suspect was wearing what is thought to have been a fake explosive device.

He was a former prisoner and convicted of a terrorist offence.

The BBC has spoken to people who were inside Fishmonger's Hall, where a criminal justice event was taking place.

Dozens of people were in attendance, including students from Cambridge University and former prisoners.

The university said it was "gravely concerned" about reports of its students and staff being caught up in the attack and was urgently seeking further information.

Of the injured people, one is critical but stable, a second is stable and a third has less serious injuries.

Details of what happened are still emerging, but videos on social media appear to show passers-by holding down the suspect on London Bridge.

Another man in a suit could be seen running from him, having apparently retrieved a large knife.

The footage then shows an officer arriving, seeming to indicate to the group to move, and firing a shot.

The actions of the public have been widely praised, including by Prime Minister Boris Johnson, Labour leader Jeremy Corbyn and Ms. Dick, who said they had shown "extreme courage".